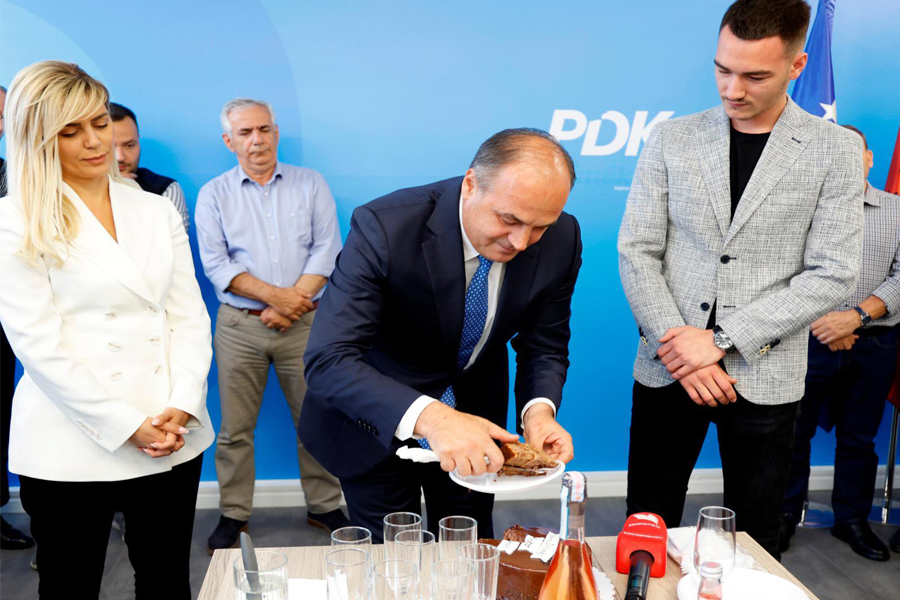 Today, the former Speaker of the Assembly of Kosovo and the Democratic Party of Kosovo (PDK), Kadri Veseli is celebrating his 54th birthday. This is the first birthday that Veseli is expecting outside his family, associates and party members.

Nevertheless, his fellow party members, on his 54th birthday, gathered in the offices of the Democratic Party of Kosovo (PDK), to symbolically congratulate Vesel on his birthday.

The acting chairman of the PDK, Enver Hoxhaj, along with Kadriu’s son, Klestori, opened champagne for the birthday of former chairman Veseli.

Hoxhaj said that this is a symbolic way to celebrate the birthday of their president who stressed that it is being unjustly held in the Hague Tribunal. He adds that Veseli will return to Kosovo victorious and white-faced.

“This is a symbolic way to mark the birthday of our party chairman, Mr. Veseli, who is being unjustly held in court. And I am here together with Klestor, Kadriu’s son but also with many comrades and his friends to say happy birthday to the party chairman 100 more, you will return to Kosovo victorious and white-faced and technically you are not with us “but you are in our hearts and minds as members of the Democratic Party of Kosovo,” he said.

Hoxhaj further expressed confidence that the next birthday will be celebrated together with Veselin in the offices of PDK.

“We are often used to celebrating such birthdays together, to celebrate them in times of Kosovo’s captivity, to celebrate them when Kadriu, Hashimi and many other friends have traveled to freedom, and the journey to freedom is one of confrontation. the most difficult that a leader and a people in war can have. But we are sure that the achievements that Kosovo has thanks to the contributions of Kadri, our president and thanks to the contribution of comrades in the KLA and thanks to comrades in PDK will be the eternal achievements of the state of Kosovo. Kadri, even though you are not among us, we want to wish health, success to you and many other comrades who are unjustly kept in Court. I know that you will have a small party there, just like us who have a small party today without you here in Prishtina. But I know that the great holiday that you have brought to Kosovo, the liberation and independence of the country will be one of the greatest holidays that the Albanian people will have every time. Congratulations, long life and success and I am very sure that on the next birthday, next year we will all be here together in the Democratic Party of Kosovo “, wished Hoxhaj.

Daut Haradinaj introduces the next candidate: Strong support for our vision for Pristina