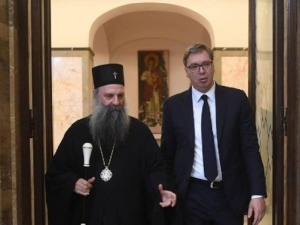 The meeting between President Vučić and Patriarch Porfiri, which was initially announced for tomorrow, took place after combat readiness of the Army and police raised to the highest level and since he was the head of the Serbian Orthodox Church earlier in the day returned from the administrative point of Merdare.

The Serbian Orthodox Church announced that from the point of view of human rights and religious freedom of any person, this decision is unreasonable and absolutely unacceptable.

“The Patriarch knows that the Serbian people, especially in Kosovo and Metohija, received this news with great indignation, but he appeals not to allow this provocation to become an excuse for further endangering our people and their sanctuaries. The Patriarch will not leave his people and will do everything he can it is possible to meet him and to pray to God together with him as soon as possible,” concludes the announcement of the Serbian Orthodox Church.

Authorities in Pristina on Sunday, they forbade Patriarch Porfiria to visit the Patriarchate of Peć.

The Ministry of Foreign Affairs and Diaspora in Pristina announced that it received a request to allow a three-day visit (December 26-28) of Patriarch Porfiri, and that the answer was that the visit can be approved “only after the Serbian Orthodox Church condemns, that is, fences off from the actions of its members who openly supported the barricades in the north and criminal groups”.