Protest in Mitrovica: Say the names of rapists and sexual harassers 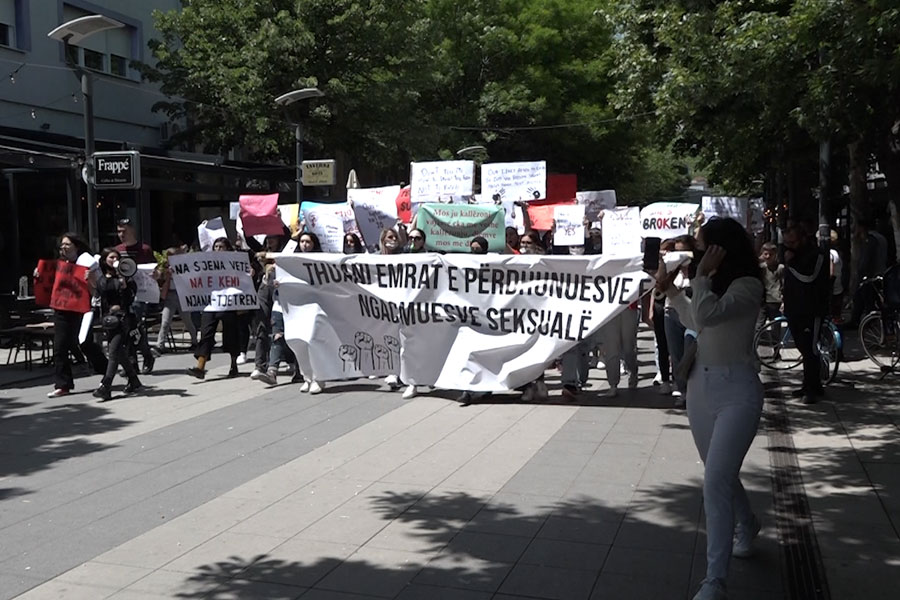 With the motto “Say the names of rapists and sexual harassers”, dozens of activists of the non-governmental organization “I am your knower”, representatives of institutions, civil society and citizens, protested today in Mitrovica against sexual harassment of girls and women recently.

Protesters held placards reading “Say the names of rapists and sexual harassers”, “Sexual harassment is a crime”, “We are not alone, we have each other” and the like.

Arnela Hajra, activist of the NGO “I am your knower”, said that for girls and women in Kosovo no place is safe. According to her, the perpetrators are all institutions, starting from the family, school, police, and higher state institutions.

“We are witnesses that girls and women are being sexually harassed and raped and everyone is being killed in Kosovo. They are being harassed and raped by boys and men on the street, at home, by professors, employers, police, municipal and government officials. No country is safe for girls and women in Kosovo. We know very well who our perpetrators are. Our perpetrators are all institutions, starting from the family, school, police, higher state institutions, which continue to produce and feed criminals. We here today say that the physical, economic, psychological violence, and deep insecurity of women must end. Therefore, we have decided not to be silent anymore and to continue our daily resistance by fighting this rotten patriarchal system “, said Hajra.

Gentiana Morina, also an activist of this organization, has announced that they are protesting today to prove that they are together with all the girls victims and that they are not alone, until there is justice for each of them.

“We are here for ourselves and per “All girls and women who are afraid to go out on the streets, go to school and work, from men who are sexually harassing and sexually assaulted, and stand by each other until there is justice for every girl and woman,” Morina said.

On the other hand, the well-known lawyer Musa Damati, emphasized that the category of criminal offenses against sexual integrity is regulated by Article 20 of the Criminal Code of Kosovo. According to him, potential perpetrators of these offenses are sentenced to up to 20 years in prison. He added that the criminal legislative infrastructure regarding this issue is quite good in Kosovo, only that the prosecution bodies should be put in function and uncompromising protection of this category.

“Based on the relevant provisions set out in Article 20 of the Criminal Code of the Republic of Kosovo, the category of criminal offenses against sexual integrity is regulated. And based on the relevant provisions, a criminal, serious and high sanction is determined for the potential perpetrators of these acts. Respectively, a criminal sanction of imprisonment of up to 20 years is determined for possible perpetrators of this category of criminal offenses. Therefore, I assess that the criminal legislative infrastructure is quite good in Kosovo only that the prosecution bodies should be put in function and uncompromising protection of this category and this criminal incriminating domain “, said for KosovaPress Damati.

Recently, the country has been shaken by the case of a minor who was sexually harassed near an elementary school in Pristina prompting numerous reactions, including protests in the capital demanding the inclusion of sex education in school curricula.

122 patients with COVID-19 are being treated in UCCK and hospitals, 6 in serious condition – Latest News