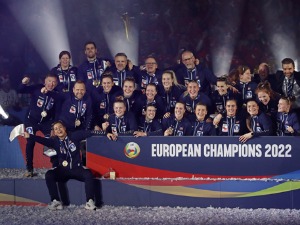 The final of the European Women’s Handball Championship was played in Ljubljana, and the Norwegian women won the trophy after a reversal, at halftime the score was 12:15 for the Danish team.

With this title, the Norwegian women’s handball players secured participation in the Olympic Games in Paris in 2024.

The most effective handball players in Norway were Nora Merk with eight, Kristine Bristol with four, and Henny Reistad and Vilde Ingstad with three goals each.

The bronze medal was won by the selection of Montenegro. Also in Ljubljana, in the match for third place after extra time, the Montenegrins defeated the current Olympic champion France 27:25.

In the regular part, the match ended without a winner, 22:22.

After an additional 10 minutes, Montenegro was better and reached the bronze medal at the continental championship. Montenegrin women won European gold once, in 2012 in Belgrade.

The most effective in the selection of Montenegro were Jovanka Radičević and Đurđina Jauković, who scored six goals each.

In the French team, the best were Estelle Nze Minko and Lucy Granier with four goals each.