RTS :: Partizan and Good some extent every in Belgrade 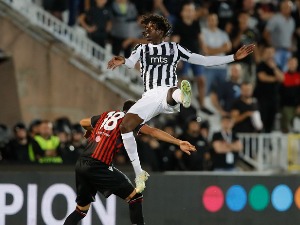 The match could not have started worse for the black and whites as it is Nice took the lead practically from the first attack.

After a mistake by Svetozar Marković and a penetration of the guests on the left side of the pitch, the ball reached the heart of the black and white penalty area, from which the defenders of Partizan failed to kick it out, but clumsily deflected it only for a short time to the left back Brian, who shot accurately from the first. with his right foot and defeated Popović.

Already four minutes later, Ricardo was the first to threaten the visitors’ goal, but his header ended up outside the frame of the goal.

The Nice players managed to kill the game, Partizan nervously tried to attack and be more decisive, but they did not find a way to organize a good action for a long time, get close enough and threaten Schmeichel’s goal.

The visitors could have scored a second goal, but Popović made good interventions in the 26th and then in the 28th minute to stop the attempts of Laborde and the Brazilian Dante.

Black and white had the best chance to score in the first 45 minutes of the game towards the end of the first half.

First, in the 44th minute, the rebound after Ricardo’s shot reached Nath, who shot from about 15 meters. Schmeichel was already beaten, but the ball was stopped on the way to the net by the Algerian defender Yusuf Atal.

Very soon, Schmeichel himself had to prove himself as Andrade shot well from the left wing, but the Nice goalkeeper was up to the task.

The players of the French team started the second half with good opportunities to double their advantage – first, Pepe shot over the goal from a free kick from the edge of the penalty area, and then Laborde was in a very favorable position, but he sent a very bad shot towards the Partizan goal, even though he almost no one bothered.

The black and white equalized in the 60th minute – Natho, after the excellent action that the Partizan players started even before their goal, unselfishly passed the ball to Diabate who received it on the right side and undefendedly placed it in the far corner.

The black and white could have conceded a goal very quickly and again naively – Diop met a cross from the right wing at the second post and headed the opposite corner. He passed the goalkeeper of Partizan, who remained on the goal line, and hit the post, and the ball happily returned straight into the arms of Popović.

Even though the game started shockingly for Partizan, the black and white could get all three points at the end. Tonight, the excellent Diabate created a counterattack in the 70th minute and found Ricardo with a return ball, who put the ball over the crossbar from about 12 meters.

In the second game of Group D of the League Conference, Cologne beat Slovakia 4:2 in Germany. The Germans are now the first in the group with four points, Partizan and Nice have two each, while the Czechs have one point. against Partizan in the first round of the competition.