RTS :: The “everlasting” derby has began 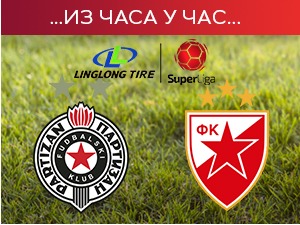 5` What a great chance for Dionysus

Dioni used the clumsy reaction of the back line of Partizan, he came out in front of Popović, but the goalkeeper of the black and whites defended the shot of Dioni.

Katai was the first to threaten, he shot from a distance, but Popović was ready and surely caught the ball.

The derby has started!

The Red Star football players are starting from the center.

The players go out on the field

About 15,000 people are in the stands, everything is ready for the derby.

Fight of fans in South Boulevard

An ugly overture before the derby – a fight between fans on the streets of the capital.

Koeman: I wanted to go to Barça, but I did not expect such problems – Latest News