RTS :: The Lakers fired up in opposition to the Cavaliers, Cleveland with a 17:Zero sequence to victory 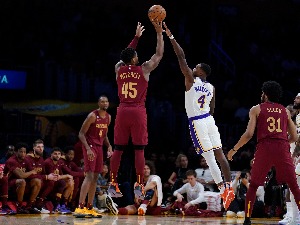 It seemed at the start of the first part that the Lakers got serious and that they were determined to prove to the rest of the league that they are improving by winning over a strong team from the top of the East.

In the first part, they led 26:14, it smelled like a good game for the hosts. Especially because they maintained a decent lead against the Cavaliers at halftime, when it was 64:58.

Second half, different story. Cleveland went on a 17-0 run without any trouble, securing a convincing victory.

The winners were led by Donovan Micec with 33 points, followed by Darius Garland with 24 points. Jarrett Allen played well with 16 points and 11 rebounds, Carys Lavert with 12 and Kevin Love with 10 points and rebounds each.

Cleveland continues their great start, improving to 8-1. The Lakers are second to last in the West with 2-7, they have duels with a spirited Utah and a city derby with the Clippers waiting for them.