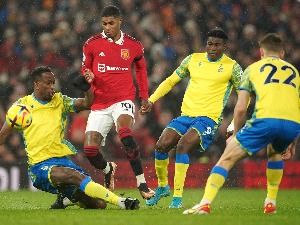 With the victory against Nottingham Forest at Old Trafford, United made it five wins at home, and Marcus Rashford scored his fifth consecutive goal in the same number of matches for the Red Devils.

From the start of the game, Manchester United players set up an offensive game and dictated the tempo of the match.

The first goal of the match was scored by the aforementioned striker in the 19th minute after a coordinated action and assisted by Eriksen from a corner.

Three minutes later, Martial was the scorer from the edge of the penalty area after Rashford’s pass and a nice move that started in the United half after a Forest attack was successfully defended.

Until the end of the first half, the result did not change, the guests scored a goal, but it was canceled after the VAR check.

At the beginning of the second half, Manchester attacked, similarly to the first part of the game. With various actions, the local footballers moved more easily towards the opponent’s goal, on the other hand, there were no real reactions and counter-attacks.

Towards the end of the match, the Brazilian Fred set the final score, he was precise in the 87th minute assisted by his compatriot Casemir.

Manchester United is in fifth place with 29 points, while Nottingham Forest is in 19th position with 13 points won so far this season.

In the next round, United visit Wolverhampton, while Nottingham Forest welcomes Chelsea.