Serbia is grateful to its buddies from the UAE 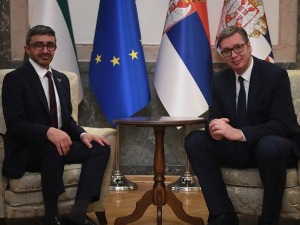 The President of the Republic of Serbia, Aleksandar Vučić, met today with the Minister of Foreign Affairs and International Cooperation of the United Arab Emirates, Sheikh Abdul bin Zayed Al Nahyan, who conveyed to him the greetings of the President of the UAE, His Highness Sheikh Mohammed bin Zayed Al Nahyan, and with whom he discussed the expansion of bilateral cooperation and economic relations.

They also discussed the concretization of proposals and plans for the implementation of new joint projects of mutual interest, which were also the topic during the visit of President Vučić to the Emirates and the meeting with His Highness Sheikh Mohammed bin Zayed Al Nahyan in September of last year in Abu Dhabi, according to the statement. the president.

Wishing a warm welcome to the distinguished guest, President Vučić emphasized that building strategic relations and a comprehensive, solid partnership with the UAE is of key importance for the Republic of Serbia, and that our country pays the greatest attention to developing and strengthening cooperation with the Emirates, which is based on mutual respect and trust. , but also on the common vision of progress and the values ​​we share.

“Serbia is grateful to our friends from the UAE who were with us in difficult times and who selflessly helped our country and people when we needed it the most, and we do not forget that,” said President Vučić and added that the two countries are moving strongly in intensification of overall relations on all levels.

President Vučić particularly pointed out that previous major projects such as Belgrade on the water and investments in our national airline contributed to the exceptional positioning of Serbia on the map of countries with a strong economic rise, thus opening a new chapter of progress in our modern history.

Serbia is a hub that connects East and West

“Serbia is now a big center, a crossroads and a hub that infrastructurally and economically connects the East and the West, but also the driver of the rapid development of the entire region. We continue to use this strong momentum, working on new projects and investments together with partners from the UAE,” the president said. .

He pointed out that cooperation will further intensify in the fields of technology, innovation, medicine, agriculture, military industry, culture, education and the latest scientific achievements in the field of artificial intelligence.

President Vučić and Minister Al Nahjan exchanged opinions on current global geopolitical trends, as well as the situation in the regions of the Western Balkans and the Middle East.

The president informed the minister in detail about the latest developments in Kosovo and Metohija, with special emphasis on the conditions in which the Serbian community lives there, pointing out that Serbia continues to make maximum efforts in order to maintain peace and stability in the region, but also the continuation of dialogue as the only real ways to resolve open issues.

“Given the increasing political and economic influence of the UAE on the geopolitical scene, not only in the regional context and local frameworks, but also at the global level, I am grateful for the attention that the leaders of the Emirate pay to our opportunities and challenges, as well as the understanding they show for position of Serbia,” stressed President Vučić.

Reiterating that our countries share the same vision of a policy of peace, negotiation, connection and willingness to cooperate with all parties of good will for the general welfare of all citizens.

The meeting also discussed the expansion of cooperation in numerous other areas, and President Vučić asked Minister Al Nahyan to convey especially warm greetings to the President of the UAE, His Highness Sheikh Mohammed bin Zayed Al Nahyan, pointing out that his return visit to Serbia would be a special honor for our country and people.