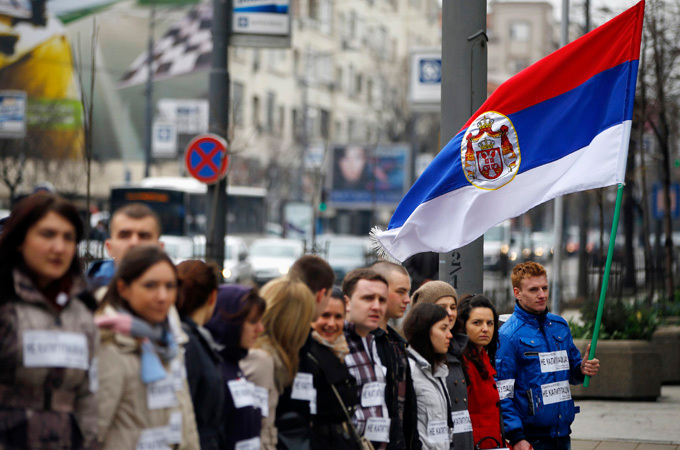 Serbia has rejected a European Union brokered plan to combat the ethnic division of its breakaway province of Kosovo, a move that could undermine the Balkan country’s EU membership aspirations and fuel tensions in the region.

The EU had given Serbia until Tuesday to say whether it would give up its effective control of northern Kosovo in exchange for opening accession negotiations.

“The Serbian government cannot accept the principles that were orally presented to its negotiating team in Brussels because they do not guarantee the Serbian people in Kosovo full security and protection of human rights,” Serbian Prime Minister Ivica Dacic told reporters.

Belgrade “promises an urgent resumption of the dialogue with Pristina through the mediation of the EU,” said Dacic.

The biggest stumbling block in the talks that began late last year concerns the future of the Serb minority in Kosovo, particularly in the north.

Kosovo declared its independence from Serbia in 2008. Since then, it has been recognized by more than 90 countries, including the United States and most of the EU member states, but Serbia has refused.

An agreement with Kosovo is the most important condition set by Brussels for Serbia if it wants to start accession talks for EU membership this year. A rejection could delay Serbia’s integration into the EU indefinitely.

Dacic spoke after the Serbian government met to draft a response to proposals made orally in Brussels last week when Belgrade and Pristina failed to find common ground on which to relieve their longstanding tensions.

Both sides should officially respond by Tuesday to the proposals made by EU Foreign Affairs Representative Catherine Ashton, who chaired the eight rounds of talks between the Serbian and Kosovar delegations.

In Brussels, Ashton said she regretted the Serbian government’s decision and called on them to “try one last time to reach an agreement”.

Serbia and Kosovo have been pressured by Brussels to reach an agreement before a European Commission report is due to be published on April 16.

The report, which EU heads of state and government will evaluate at the end of June, is crucial in paving the way for Serbia to join the bloc, as the start of accession talks depends on improving relations with its former province.

When asked if the dialogue can continue, Kocijancic said: “We have to see the reaction first and then decide how to continue it.”

In Pristina, the Kosovar government said it was “disappointed” with the Serbs’ refusal but insisted on staying committed to the negotiation process as “dialogue is the only solution” to a longstanding problem.

The two points at issue relate to the delicate issue of representation in the police and in courts. Pristina opposes Belgrade’s insistence on full representation of Serbs in areas inhabited by a Serb minority in the ethnic Albanian majority of Kosovo.

Both sides had previously agreed to set up an association of Serbian communities, but Kosovo refuses to give it the executive and judicial powers requested by Serbia.