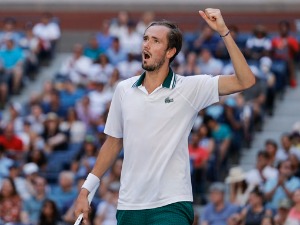 The Russian tennis player has one more obstacle left until the final, while Djokovic is still waiting a quarterfinal match with Mateo Beretini.

“I don’t think about Djokovic. We don’t play on the same days, so I watch his matches, primarily because I love tennis. I don’t support anyone, I just follow,” Medvedev said at a press conference after reaching the semifinals of the US Open.

He advanced to the semifinals in New York, after he defeated the Dutch tennis player Botik van de Zandschlup with 3: 1, and he will fight against the Canadian Felix Auger-Aliasim for the finals.

“As we have all seen – everyone can beat everyone. If Djokovic is in the finals, and I will be there as well – I will be happy. He will probably be too,” Medvedev said.