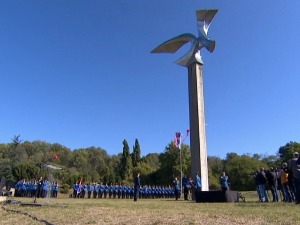 The commemoration began at 11 a.m., with an honorary greeting from the honorary unit of the Serbian Army Guard, and after that, Prime Minister Ana Brnabic paid tribute to the victims by laying wreaths at the Monument to the Victims of the infamous execution site, with the anthem of God of Justice, performed by the Serbian Army Orchestra.

Brnabić said that the fallen heroes defended us and all generations that come from evil that we must never and nowhere take root and against whose manifestations we must all fight together with all available means everywhere and always.

“In this place which at the same time symbolizes the mass resistance that these great people offered to the occupier at the cost of their lives, and this time I repeat the same message of resolute struggle against every form of fascism that was as important then as it is today and as it will be forever. “Heroes suffered with their lives, defended us and my generation and all those generations that come from that evil that we must never and nowhere take root and against whose manifestations we must all fight together with all available means everywhere and always,” Brnabić pointed out.

She said that today, Serbia, taught by the turbulent history and suffering of our people during the 20th century, is firmly committed to the path of peace.

“They say that the future belongs to those who remember the past the longest and for the longest time and have just been taught by the turbulent history and suffering of our people during the 20th century. Today, Serbia is firmly committed to the path of peace,” the Prime Minister said.

Slavko Milovanović, a survivor of the camp, states that many children, including him, spent their early childhood in camps and refugees.

“We former children-camp inmates were born when the war started in Europe or reached our country. We spent our early childhood in refugees, dugouts and camps, and most did not survive. The liberation of the country from fascist occupation, most survived without surviving parents and relatives , burned hearths and looted property “, stated Milovanović.

Members of the diplomatic corps and representatives of 38 foreign embassies in Serbia also paid tribute to the victims by laying white roses.

The artistic program “They are our memory” was performed as part of the commemoration, and the actors Ivana Žigon, Vjera Mujović, Grigorije Jakišić will speak the poem “My soul is a killed bird”.

In the poem on the occasion of marking the Day of Remembrance of the Victims in Jajinci, the texts of songs by Branko Miljković, Dušan Matić, Mak Dizdar were used.

Jajinci was the largest place of suffering on the territory of occupied Serbia in the Second World War, where, according to official, although probably inaccurate data, from the summer of 1941 to the fall of 1943, the Nazis shot 80,000 Serbs, Jews and Roma.

Men, women, members of the People’s Liberation Movement, anti-fascists, but also randomly arrested civilians were killed in Jajinci, as part of the revenge of the German occupying authorities in Belgrade, which issued a proclamation that 100 civilians must be killed for every German killed and a German wounded. 50 people must be killed.

Before the Second World War, the shooting range in Jajinci served as the “School shooting range of the Belgrade garrison” of the army of the Kingdom of Yugoslavia, so that the German authorities could turn it into a place for executions.

The memorial park, within which the monument to the victims is located, was opened on October 20, 1964, on the occasion of the 20th anniversary of the entry of partisan forces into Belgrade.