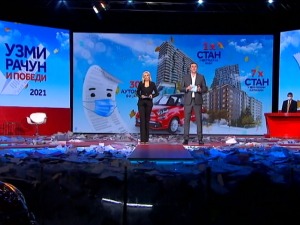 The lucky winners of the prize game “Take the bill and win 2021” were pulled out of the pool in the studio of the Serbian Radio and Television with 10,094,869 received envelopes, by the Minister of Construction, Transport and Infrastructure Tomislav Momirović and water polo player Nikola Radjen.

She received the most valuable award, an apartment in the Belgrade neighborhood of Zemun Gate Marjana Đekić from Belgrade.

The envelope signed by Vesna Popović from Banovo Brdo, drawn as a potential winner of the “Fiat 500L”, was not correct, since the phone number was not written.

Minister Momirović pointed out that taking into account is key to the fight against the gray economy, and assessed that it is especially difficult in construction.

He points out that the problem is complex, that the government is effectively fighting against it, and appeals to the citizens to abide by the rules and take the bills.

In the previous draw, held last Saturday, the apartment was given to Nedeljka Zukanović from Belgrade.

All adult citizens of Serbia have the right to participate

Citizens expect valuable prizes in a total of six autumn draws: 30 cars “Fiat 500L” and eight apartments in Belgrade – seven in the settlement “Zemunske kapije” and the main prize – an apartment in “Belgrade on the water”.

All adult citizens of Serbia who send envelopes with 10 fiscal invoices or 10 slips, not older than April 1, with a minimum individual amount of 100 dinars, have the right to participate in the prize game, organized by the Government of Serbia and supported by NALED. Sending envelopes is completely free.

Fiscal bills and slips should not be mixed in the same envelope. It is necessary to write the name and surname, address from personal documents and contact phone number on the back of the envelope, while on the other side it is enough to write “Take the bill and win 2021”.

During the summer, between the two rounds of the prize game, bills and slips were allowed to be sent all the time. All envelopes, sent from April 15 this year, participate in all draws during the fall.

Citizens can find all the information about the prize game on the website www.uzmiracun.rs, and a contact center is available to them via email [email protected], for all additional questions and support.