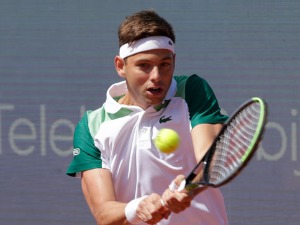 Filip Krajinović managed to beat the Pole after a great fight, who offered strong resistance and won the second set, but in the end he had to lay down his arms in front of our tennis player.

Until the middle of the first set, there was an equal fight, then our tennis player managed to take the service away from the opponent. Then Krajinović, with another break, easily brought the set to an end.

At the start of the second set, the Pole came to a break advantage. Krajinović tried to fight back, he missed several break opportunities and Majšak equalized.

Great fight in the deciding set as well. First, the opponent missed the chance for an early break, and in the next game, our tennis player took the service away from the opponent.

In the eighth game, Filip missed the match ball on the opponent’s serve, and in the next game, on his serve, he used the second match ball, after saving two break opportunities.

His opponent in the semifinals will be the 14th tennis player in the world and the first seed, the Italian Janik Siner, who defeated the Australian James Duckworth 7: 6 (7: 4), 6: 4.

The tournament in Sofia is played for a prize fund of 389,270 euros.

Krasniqi: Ismaili will be in the runoff