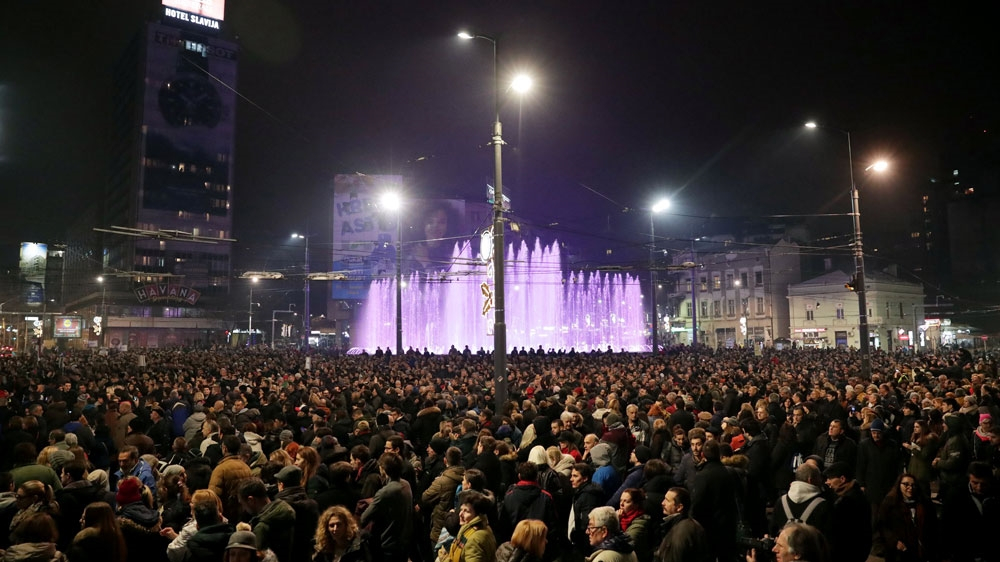 The protests began in response to the beating of an opposition politician in a southern city.

Thousands of people took to the streets in the Serbian capital Belgrade for the third week in a row to protest against the president’s government Aleksandar Vucic.

More than 5,000 people marched towards the Serbian state broadcaster RTS – widely viewed as a supporter of Vucic – on Saturday before moving to government headquarters.

The protests, which initially began in response to the beating of opposition politician Borko Stefanovic during a rally in a southern city, have escalated and now include calls for more accountability and freedom of expression.

Stefanovic was approached by a group of young men in hoodies who smashed his head and briefly knocked him unconscious.

Marko Subotic from Al Jazeera reported from Belgrade that the number of demonstrators on Saturday exceeded those of the past few weeks.

“This was the biggest protest from citizens because they are not organized by any political party, but actually organized by some public figures and student organizations, albeit supported by opposition parties in Serbia,” said Subotic.

“They will return next Saturday to tell President Vucic, who has been in power for six years, that they disagree with the current situation in Serbia, in particular that there is no free speech and opposition leaders cannot be heard at the national level Television, including the civil service of Serbia. “

Vucic mocked the first rally in Belgrade, saying it was small and that “even if it were five million” he would not give in to their demands.

The second protest took place at # 1od5miliona (one of five million).

Although Serbia is nominally a democratic society with political opposition and free elections, Vucic’s firm seizure of power has made it difficult for opponents to be heard or to respond verbally against them.

Vucic publicly condemned the attack on Stefanovic and the police quickly arrested the attackers, but opponents like Dragan Djilas say he fostered an “atmosphere of violence” that made such an attack possible.

His progressive party has dominated the three parliamentary elections since 2012. Vucic took up a five-year term as president last year.

The Serbian opposition, weakened by civil unrest, corruption Scandals and little attention in state and pro-government media since the acquisition of Vucic have been completely marginalized.