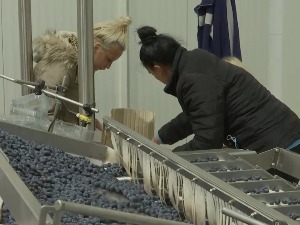 At 33 degrees, the RTS team entered the refrigerator where it is four degrees. They were there for 20 minutes. The first 10 minutes were really nice to cool down, but it got cold.

They do not know about sunburn and dehydration. While most Belgraders are melting in tropical temperatures these days, they are working at a temperature of only four degrees.

When asked how he feels when he goes to plus 35 with four degrees, how much is in the refrigerator, Aleksandar Kuzmanović says – not at all, sweat, heat.

“We can’t go to the sun right away, because we can faint, because the difference is here and outside. We wait for about five minutes, 10, and then we go,” says Sanela Simonić.

Chamber workers should not be longer than two hours. That’s why they take breaks of half an hour, and then again in the refrigerator.

“Only jackets, you need to dress properly and that’s it, you don’t need any equipment!” Says Sanela Simonić.

Still, they say, it can withstand working at such low temperatures. It is best in the refrigerator in the summer, although it suits them in the winter as well, because it is often warmer there than outside.