Stefanović resigned as a result of the membership demanded it 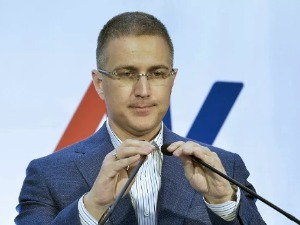 “Membership was requested because there are certain indications, doubts. The membership declared which official was doing badly in the party,” Djukanovic said on the show “Hit Tweet” on TV Pink.

When asked when the President of Serbia, Aleksandar Vučić, meant when he said that he was disgusted by those who expect foreign embassies to put them in positions and place them with their party comrades in the media, Đukanović said that “if he started listing, they would not finish show “.

“That is at the very top and in the membership,” said Djukanovic.

He added that he was especially hurt by the story about the brother and son of the President of Serbia, and when asked if it was planted by his party comrades, he answered in the affirmative.

“Among other things, the police worked,” said Djukanovic.

Djukanovic said that he did not raise the issue of Stefanovic’s responsibility, but that he “learned everything years ago” and pointed out that one should have real ambitions in politics and know “what your real reach is”.

He cited the new vice president of the Main Board of the SNS, Aleksandar Šapić, as an example of a person who “realistically understands his reach” and assessed that that is why Šapić is successful.

Djukanovic pointed out that the SNS lost to Sapic in New Belgrade even when he was the strongest.

“It’s respectful because he knew how to beat us. He had a better program and that’s why I’m glad because he will bring something new to the SNS. First of all, in politics it is very difficult for people to suppress their vanities and unrealistic ambitions. I think maybe that was paramount for Stefanović, “said Đukanović.

As for the session of the Main Board of the SNS, Djukanovic rejected the allegations, as he said, of the “media under the control of Djilas”, that Vucic was not allowed to replace Stefanovic until the end.

“If he wanted to, he couldn’t, I don’t know what to do to him. Someone may have done something positive in life, and that’s appreciated. You can’t a priori erase someone. That’s what they’re used to, ‘they in their little Democratic Party.’ which Lutovac leads, 60 people wipe it out by decree and then talk about democracy. Stalinist purge of the worst kind, “Djukanovic said, adding that the SNS would not do that.

Djukanovic emphasized that Stefanovic did a lot of positive things.

“Now everything else and everything about wiretapping, Vučić may have the problem that he is a very sick man, in the sense he is too mild. We are not to judge, God judges, and there are competent state bodies. If the prosecution initiates something, courts, “Let them do their job. We are not the ones who should cut off our heads,” Djukanovic said.

Commenting on the announced changes in the party, Djukanovic said that those changes would happen.

He also emphasized “that millions of euros are being invested” in order to bring down Vučić.

Asked to specify when he meant, he said that he was talking “about a foreign factor and the entire team around Djilas”.