The combat in opposition to fireplace continues in Slovenia, the hearth has been reactivated within the Nationwide Park “Sutjeska” 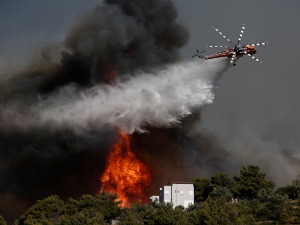 The fight against fire continues in Slovenia. There are about 1,500 firefighters on the ground, and support from the air is also expected, announced the Administration for Protection and Rescue of Slovenia.

There are also volunteers in Kras who will cut trees around the threatened villages to prevent the fire from spreading.

Civil Protection spokesman Robert Okorn said that the night was calmer than the previous one, and the firefighters mainly focused on the western part of the fire area towards Lokvice and below Kostanjevica on the Kras.

“The rain that fell early this morning didn’t help much because everything dries very quickly,” Okorn said.

According to him, new firefighting units are arriving, and air support is also being announced.

Okorn stated that the possibility of strong storm surges remains the biggest risk for the spread of the fire.

According to meteorologists, more heavy rains on the Slovenian Karst can be expected only on Tuesday.

The fire in the Hrčavka river canyon is under control

Novitović pointed out for RTRS that the members of the Srpska Helicopter Service also operated in the evening hours and that the fire is under control.

“Maximum efforts are being made to prevent the extension to the part of Zelengora and to prevent the National Park ‘Sutjeska’ from being threatened by fire,” said Novitović.

He explained that it is a very inaccessible terrain.

“The canyon of the Hrčavka River itself is so inaccessible that no one is able to operate from the ground. It remains for us that, by making maximum efforts, the members of the Helicopter Service keep the fire under control. We are putting all the resources we have at the disposal of the ‘Sutjeska’ National Park,” he emphasized. Novitović.

Speaking about the fire in the Blidinje Nature Park, he says that the situation at the fire site is extremely difficult.

“The burned area is large, it threatens to endanger the monastery,” said Novitović.

He once again appealed to citizens not to light fires in the open air.

“No one can say with certainty that the fire in the ‘Sutjeska’ National Park was caused by a human factor. What we know is that it is not a natural factor, that is, a lightning strike, as was the case in Blidinje,” said Novitović.

Large forest fires engulfed the north, south and east of Greece today. Hundreds of residents and tourists have been evacuated from the eastern Aegean island of Lesbos after wildfires that broke out yesterday destroyed homes and threatened villages.

In the north of the country, firefighters and volunteers are fighting a fierce fire for the fourth day in a row in the Dadija National Park, a protected nature reserve known for its colony of vultures.

This fire forced the evacuation of the village of Dadia on Saturday night, while the residents of Chrysokelari in the Peloponnese had to flee the fire near Koroni.

Greece is currently in the grip of a heat wave with temperatures of 42 degrees expected in some regions. The extreme weather is predicted to last for 10 days, raising fears of other fires.