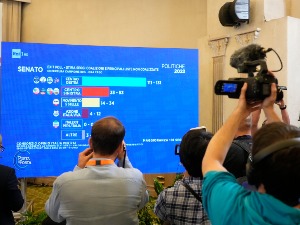 More than 50 million Italian citizens voted for the new parliament. Polling stations are closed at 11 p.m.

According to exit polls published by RAI television, the coalition of right-wing parties is leading, having won between 41 and 45 percent of the vote, which is enough to form a parliamentary majority, reports Reuters.

The coalition consists of the far-right opposition party Brothers of Italy, whose leader is Giorgio Meloni (between 22 and 26 percent of the vote), Forza Italia of former Prime Minister Silvio Berlusconi (6 to 8 percent), Matteo Salvini’s Lega (8.5 to 12.5 percent) and party “We, the Moderates” (from 0.5 to 2.5 percent).

The bloc led by the Democratic Party, the strongest party of the center-left forces headed by former Prime Minister Enrico Letta, won between 25.5 and 29.5 percent of the vote.

The Five Star Movement, led by former Prime Minister Giuseppe Conte, won between 13.5 and 17.5 percent, according to exit polls.

The party of the center “Action” has between 6.5 and 8.5 percent of votes.

If her option wins, Giorgia Meloni would be the first woman in the position of prime minister in Italy.

Extraordinary elections followed the resignation of Prime Minister Mario Draghi in July, when the ruling coalition fell apart after the Five Star Movement boycotted a vote of confidence in the Government.

Italy’s next prime minister will lead the country’s 68th government since 1946 and will face a host of challenges, particularly rising energy costs, as well as a public debt that stands at around 150 percent of gross domestic product.