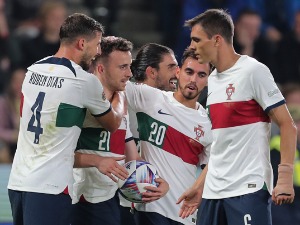 With this victory, the Portuguese took advantage of the Spaniards’ setback and took the leading position in the group with ten points. Spain is second with eight.

The Portuguese took the lead in the 33rd minute through Dalota. The guests doubled their lead in the second minute of stoppage time through Fernandes. The home team had a chance to reduce the deficit, but Schick missed the penalty four minutes later.

With his second goal, Dalot increased his team’s lead in the 52nd minute. The final result was set by Jota in the 82nd.

In the second match of this group, Switzerland defeated Spain 2:1 and snatched important points from it in the fight for first place and placement in the playoffs.

The guests took the lead in the 21st minute of the match, the scorer was Akanji. Alba equalized for the home team in the 55th minute. Just three minutes later, the Swiss make the final 2:1. Embolo was the shooter.

Table before the last round:
Portugal 10
Spain 8
Switzerland 6
Czech Republic 4