The plan for Kosovo and Metohija has been accepted by all EU members, if we don’t cooperate, European integration will likely be interrupted and investments will likely be withdrawn 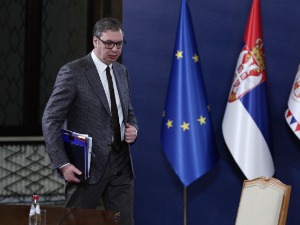 President Aleksandar Vučić says that we have seen the first version in various media in the past few days, which does not differ much from the second version, the so-called. of the Franco-German plan, which, as he says, is no longer a Franco-German plan, but something much more than that.

“I’m afraid that no one wanted to talk about the context, the circumstances and what Serbia is facing,” said Vučić.

When you look at a paper, it’s easy to find countless objections, and in this paper it’s not easy to find anything to be enthusiastic about, on the contrary, says Vučić.

“Precisely due to the fact that the geopolitical circumstances have changed, there is a lot of nervousness, Europe is in a de facto war, whatever they say, there is no tolerance for any sort of jumping out in the political sense, and on the other hand, they want it in their backyard, and the Western Balkans and Serbia are theirs yard, so that everything is there the way they want it,” says Vučić.

“The question arises as to what else contributed to the situation to come out with such a harsh approach and a sense of urgency on the part of European officials supported by Washington,” pointed out Vučić.

He pointed out that after the outbreak of the Russian-Ukrainian conflict, it became one of the biggest problems for Serbia.

First of all, we are on everyone’s radar because we did not impose sanctions on Russia, and then, he adds, because of the incidents caused by Kurti’s regime.