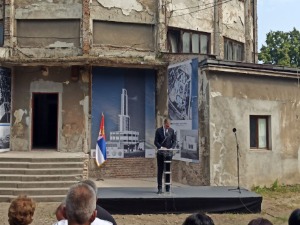 The start of work on the reconstruction of the Central Tower was marked by the laying of bricks, and the ceremony began with the performance of the hymn “God of Justice”. The beginning of the work was attended by the President of Serbia, Aleksandar Vučić, and the Patriarch of Serbia, Porfirije.

Vučić stated at the ceremony that today we are witnessing numerous attempts to relativize the events of the Second World War, and that this cannot be the politics of the present.

“Neither Europe, nor the world, and Serbia will never exist,” said Vučić.

“I want to say a big ‘sorry’ to you.” I’m sorry that this building behind me is in such a state and that for almost 80 years we didn’t take care of our past and we didn’t care about our future either,” said the president, addressing the survivors of the worst crimes and crimes of genocide during the Second World War.

He noted that history has taught us that nothing is impossible, and therefore we must remember all the sacrifices, always.

“Our historical task is to cherish in the center of modern Belgrade the memory of our fellow citizens, Jews, Serbs and all others, who suffered for no reason at the hands of the criminals of the occupiers,” said Vučić, adding that anyone who even passes by the Old Fairground will see what was happening there.

“And everyone who has even an iota of humanity will look at the world around them with different eyes, after visiting the Fairground,” emphasized the President of Serbia, stating that all the facts will be presented through documents and photographs so that no one would ever find himself saying that something like that didn’t happen at the Old Fairground, or that it’s all a myth.

“We had better things to do than deal with the victims”

Vučić reminded that the “Old Fairground” was declared a cultural asset only on July 9, 1987.

“To our shame, in the 30 years since then, and a total of 78 years, we have had better things to do than to deal with the victims, who were not very important or were left aside, for the sake of daily political goals, or so that we wouldn’t resent someone somewhere Vucic said.

As he said, it must be honestly said that the current state of the “Old Fairground”, which is visibly neglected, is the result of our attitude and carelessness since 1945.

“This is a picture and an opportunity of our shame, irresponsible and dishonest attitude,” emphasized the President of Serbia.

He pointed out that numerous generations of political leaders since the communist era ignored the victims of the camp, and that there were many promises that the place would be dedicated so that we would all remember the victims, but that this was not followed by actions.

“It’s as if we could never untangle the complicated relations, because it was always easier to turn our heads and not solve the problems. We are solving it part by part now, and it’s not a question of money, but of energy. We did something good for all citizens, Serbs, Jews , Roma, Croats, Slovaks, Hungarians, Bosniaks… Paying back our debt to our ancestors, we are reminding our descendants what they must not allow to happen to them,” said Vučić.

He added that human evil knows no borders and is present everywhere, but that is why Serbs, when they ask others not to remain silent and to confess, to speak about the crimes against us, must be sufficiently responsible and serious, and always openly and clearly also condemn those who committed crimes against others in our name.

“That’s the only way we will be able to build trust and reach reconciliation,” said Vučić.

He added that he had the honor and luck of knowing and meeting the great Shimon the Heresy several times, who said: “Six million of our people, the Jews, live in our hearts, we are their eyes that remember, that see the terrible scenes that they saw , and they will be remembered as they happened”.

“There is a lot that we can learn from the Jewish people. Unfortunately, to those six million Jews, we have to add millions of eyes of Serbs, Roma, who were killed in the killing fields here,” said Vučić.

He also mentioned General Eisenhower, who estimated that future generations would not believe the crimes that had taken place, and that is why he ordered the film crews that followed the liberation of Auschwitz to film everything immediately, because, as he said, “some bastard will be found on the path of history.” who will say it never happened”.

“We will not be silent anymore”

Vučić said that the people and citizens of Serbia, and the descendants of the victims, cannot and will not remain silent about the “Old Fairground”, because the perpetrators of the evil at that place, as he says, have a reason to hide the truth.

He reminded that the camp “Staro sajmište” was closed at the end of July 1944 and that since the end of the Second World War, at the moment when the NDH de facto ceased to exist in these areas, the truth about this camp was buried until today, as he pointed out , under heavy layers of oblivion.

“Today, on the 78th anniversary of the abolition of the camp, we are finally, some would say figuratively, and I would say real – liberating it. We are starting to restore the memory of the camp by starting to reconstruct the central tower, its iconic symbol,” said the President of Serbia.

As he said, the reconstruction of the central tower is also a symbol of our determination to reconstruct our own collective memory.

He emphasized that in that place people were brutally beaten, hanged and shot, but also died of hunger and disease and were taken to death in “dushegupka”.

From there, he added, they were deported to other death camps for “forced labor”, from which most of them died.

“All of them have in common that the Nazis, fascists and Ustashas considered them to be mortal enemies and that is why innocents suffered. Thus, our executioners showed very precisely where they stood, and where those peaceful and good people of Belgrade and Serbia stood, regardless of their national affiliation. And on what primal ideal is our victory based, and what is it based on and what is their dark defeat based on,” emphasized Vučić.

This is a historically very important act, added Vučić and pointed out that he is proud to be part of the generation that participated in the “liberation” of the Old Fairground.

Ceremonies at the place where the Nazi camps “Jewish Camp Zemun” and “Prihvatni Logor Zemun” used to be are also attended by the reis-ul-ulema of the Islamic Community Sead Nasufović, Belgrade Archbishop Stanislav Hočevar, president of the Union of Jewish Municipalities of Serbia Aleksandar Albahari.

The head of the EU Delegation in Serbia, Emanuele Giofre, the Russian ambassador to Serbia, Aleksandar Bocan-Kharchenko, and representatives of the diplomatic corps were also present.

A minute’s silence was given to all the victims of the concentration camps.

Two museum units of the Memorial Center are planned

The “Staro Sajmište” memorial center is a joint project of the Ministry of Culture and Information and the City of Belgrade, and was founded as an institution dedicated to the culture of remembering the victims and historical events that took place in the area of ​​today’s Old Fairground.

The law that enabled the establishment of the Memorial Center was passed in February 2020, and according to it, the center will collect, organize, store, maintain, research, exhibit and present archival, museum and film objects and documents.

According to the Law, two museum units are foreseen, one of which will be dedicated to the first phase of the camp – the “Zemun Jewish Camp”, and the other to the “Zemun Reception Camp”, where the majority were Serbs.

One unit, according to the plan, will be in Spasić’s, and the other in the Italian pavilion.

The memorial center will also have its own website where information about the camp will be available.

According to the law, the administrative board of the Center should have seven members, who are appointed and dismissed by the Government, two members proposed by the Union of Jewish Municipalities of Serbia, one member elected on the proposal of the National Council of the Roma National Minority, two members – on the proposal of state administration bodies responsible for cultural affairs and two members from among the employees of the Memorial Center proposed by the director of the center, whose term of office is proposed to last five years.

The Memorial Center will also include the Jewish transit camp Belgrade – Topovske šupe, which was located near today’s Autokomanda, i.e. a few kilometers away from the Old Fairground.

The camp called “Jewish camp Zemun” was located a few kilometers from Zemun, on the territory that became part of the Independent State of Croatia during the Second World War, which, at the request of the Germans, ceded that territory and allowed the establishment of a camp on it, on the condition that the NDH government that there are no Serbian guards or policemen in the camp and that the camp is supplied and financed from Belgrade.

In just five months, more than 6,000 Jews perished in the camp, and in May 1942, when the extermination of Jews was completed and Serbia was declared “cleansed” of Jews, communists, partisans, Chetniks, and civilians were brought to the camp until July 1944.

In the Allied bombing in 1944, many camp pavilions were damaged and destroyed, after which the camp was disbanded.

Most of the Germans responsible for the operation of the camp were arrested and brought to court, several of whom were extradited to Yugoslavia and executed, while the camp commander Herbert Andorfer and his deputy Edgar Enge were arrested in the 1960s after many years in hiding.

Andorfer and Enge were given short sentences in West Germany and Austria, but Enge’s sentence was never served due to his age and ill health.

Listen: Can California Lower the Price of Insulin?