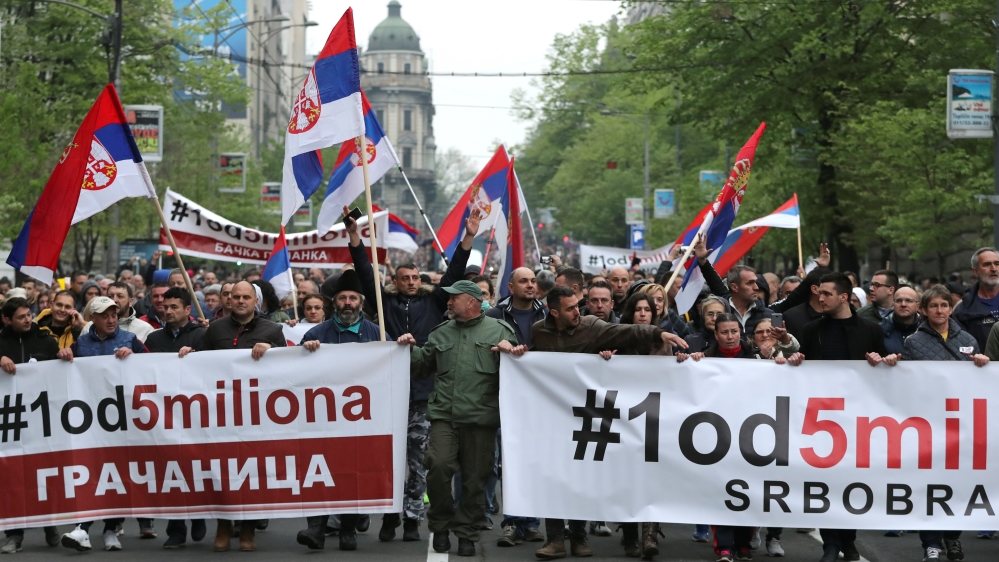 Members of the ruling party barricade themselves in parliament to prevent fascists and thugs from coming to power.

Thousands of people took to the streets in the Serbian capital to protest against President Aleksandar Vucic the anti-government Rallies.

The demonstrators who gathered outside Parliament on Saturday in central Belgrade, accuse Vucic of being autocratic.

They are demanding more democracy, freedom of the media and free elections from the government.

Opposition leaders said authorities wanted to prevent their supporters from coming to the capital for the rally, which was set to be the largest after four months of protests.

But police estimated the crowd at 7,000 to 10,000, less than some of the regular protests that have taken place every Saturday since early December.

The organizers said that many could not get to the capital because of canceled buses and other obstacles.

Vucic’s conservative party members barricaded themselves in the parliament building and local councilors across Serbia on Saturday, claiming they wanted to prevent the “fascists and thugs” from taking power by force.

Tensions rose throughout the week as pro-government media and officials claimed the opposition wanted to storm state institutions and seize power by force.

The weekly protests against the government were largely peaceful.

Vucic, who denies allegations of being an autocrat, said Saturday’s protest will “do nothing” adding that all troublemakers will be “removed from the streets”.

The late Serbian leader Slobodan Milosevic was overthrown from power in 2000 after protesters stormed the Parliament building in Belgrade.

Vucic was his close collaborator at the time. A Pro Vucic rally in Belgrade is planned for next Friday.

Table in the Super League after the 21st week: The big fight for the title and survival – Latest News