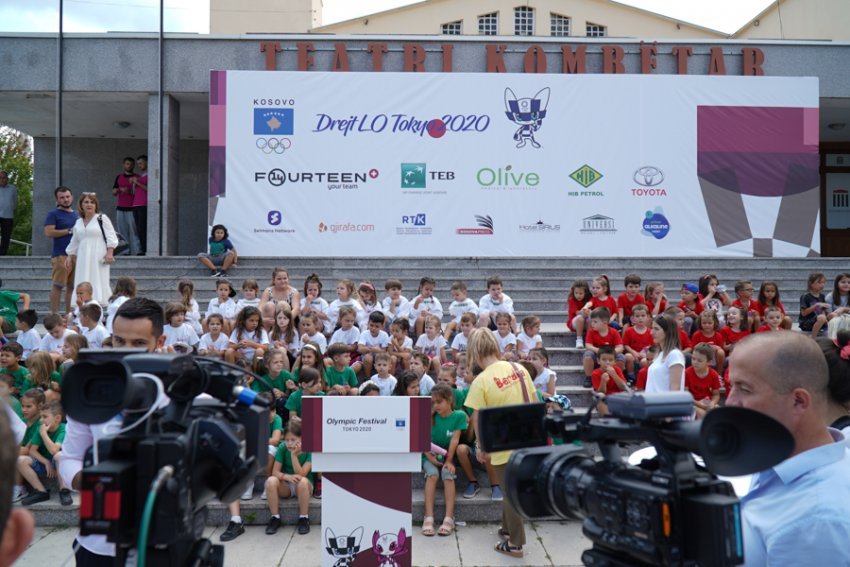 This Friday is opened the Olympic Festival “Tokyo 2020” which will be held until August 8 in “Skanderbeg” Square in Pristina.

This Friday is opened the Olympic Festival “Tokyo 2020” which will be held until August 8 in “Skanderbeg” Square in Pristina.

The festival organized by KOK will take place during the Tokyo 2020 Olympic Games in Tokyo, Japan.

The whole purpose of the festival is to promote sports in which Kosovo will be represented in “Tokyo 2020”.

The Vice President of the Kosovo Olympic Committee Eugen Saraqini at the opening ceremony of the festival who said that he hopes that the children who participated in this festival in the future to represent Kosovo in the Olympic Games.

Saraqini: Announces the Open Festival, maximum support to our athletes in Tokyo 2020

The Director of the Department of Sports Fitim Arifi, who wished success to the Kosovar athletes who are representing Kosovo in LO “Tokyo 2020”, where he said that they will hope for victory.

“On behalf of the Department of Sports, respectively the Ministry of Culture, Youth and Sports, I congratulate you for organizing the Olympic Festival which will be held throughout the duration of the Olympic Games and from here we wish success to our athletes who represent Kosovo in “Tokyo and I hope to return with medals. I also want to wish all the children who are present here and I hope that one day they will also represent Kosovo in the Olympic Games”, said Arifi.

Rexha: We will support everyone unanimously in “Tokyo 2020

“We wish that in the next Olympic Games we will have even more athletes and the support from the institutions and especially from the Municipality of Prishtina, from the Directorate of Sports, will never be lacking”, said Rexha. The Presidency of the Assembly will convene on Monday, these are the items on the agenda – Latest News