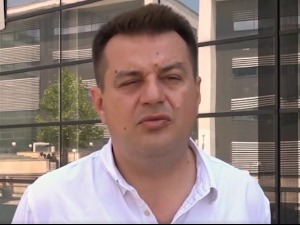 Dejan Vasić, who also represents the arrested Miljan Adžić, said that a decision will be made tomorrow or the day after tomorrow on whether his detention will be extended.

“Trajković’s condition worsened after he underwent an intervention as he had a growth on his head that was surgically removed. The wound then became infected and he needs special specialist examinations. He is in a very serious state of health, given that he is a chronic diabetic patient and has cirrhosis of the liver,” Vasić told Tanjug.

He states that he will demand from the Basic Court to replace the measure of judicial custody with house arrest.

“In the past, there have been cases where the criminal offense was defended from prison, given that it is about a person who lives in the Republic of Kosovo,” Vasić added.

Slađan Trajković is currently in the custody unit in Podujevo, a you are charging him with alleged war crimes against the civilian population in Vučitrn in 1999.

Vasić says that Trajković is strongly motivated to participate in the investigation and to prove his innocence and that he has nothing to do with the criminal acts he is accused of.

As for Miljan Adžić, Vasić says that an extension of detention for another 60 days has been requested for him, and a decision on this will be made tomorrow or the day after tomorrow.

Adžić is charged with minor crimes in Zvečan during the protests last year.

“I am sure that, under any political conditions that the investigation is carried out, it will be shown that both are innocent,” said Vasić.