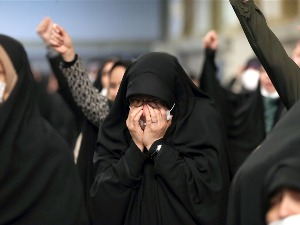 Muhammad Mahdi Karami and Syed Muhammad Hosseini were found guilty of “corruption on earth” for their alleged involvement in the death of members of paramilitary units.

Family members of 22-year-old Karami say they were not allowed to meet him before he was killed.

Prosecutors claimed that paramilitary officer Rouholah Adjamian was stripped and killed by a group of mourners paying their respects to a recently slain protester.

Protests against Iranian authorities erupted in September after the death of Mahsa Amini, a woman who was detained by morality police for allegedly “improperly” wearing a hijab.

At least 516 protesters have been killed so far, including 70 children, and 19,262 have been arrested, according to the foreign-based news agency Human Rights Activists (HRANA). 68 members of the security forces also died in the protests.

Many of those detained after the protests were allegedly subjected to incommunicado detention, torture and other ill-treatment.

Iranian officials call the protests “riots” and accuse foreign powers of inciting them.

The first death sentences were handed down in December 2022, but the convicts appealed the sentence, claiming they were tortured to make false confessions.

Lawyers representing Hosseini said he was beaten and blindfolded while in prison. “He was beaten on the soles of his feet with a metal rod,” said Ali Sharifzadeh Ardakani.

The family of Muhammad Mahdi Karami begged the authorities to spare his life. Before his death, his lawyer said he was on hunger strike because he was denied the right to choose his own lawyer for court proceedings. Instead, he relied on state-appointed lawyers.

A journalist who interviewed Karami’s parents was later arrested by police and remains in custody, according to the Center for Human Rights of Iran (CHRI).

Amnesty International described the trial as a “swift and unfair group trial” and said Iranian authorities were seeking the death penalty for at least 26 people.

The latest hangings bring the number of people executed in Iran since December to four.