We are going to hearken to every part, we’ll stick with our folks 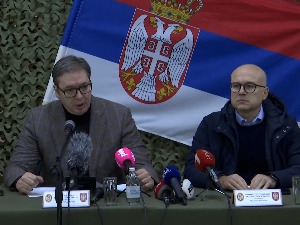 The President of Serbia, Aleksandar Vučić, said in Raška that Dejan Pantić is expected to be in his house with his family at any moment, since the barkadas are being bypassed, and the Eulex escort is also there.

It is a significant symbolic victory, but we have written that the people who were at the barricades should not be persecuted, said Vučić.

It is also important, he added, that for the first time in the official statement of KFOR we have a special document that gives the right to Serbia and the people of Kosovo, but also imposes an obligation on KFOR not to allow Kosovo forces to enter the north.

“Do I believe them, I don’t, but what else,” added Vučić.

He said that the largest number of Serbs from the barricades had not yet arrived at the meeting, to report on their decisions and demands.

“We were trying to show that we existed as a nation, that the rights of the people were threatened,” Vučić pointed out.

He said that he would fight with the Serbs in Kosovo and Metohija, and that he was always with them, and as for believing in Western proposals, he said that we have no alternative.