What could be negotiated, what should be fulfilled 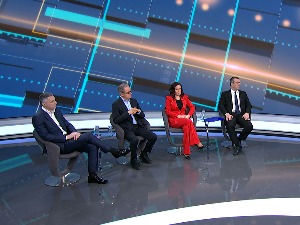 Vladimir Orlić pointed out that President Aleksandar Vučić openly spoke to the citizens about the plan that was before Serbia, about what he was facing and, as he says, about the severe consequences if we refused to deal with it.

He notes that the Assembly of Serbia will hold a session on Kosovo and Metohija, reminding that such a session was held five months ago, and that the president also spoke at it.

As for the president’s consultations with the opposition parties, he claims that they are not interested in it.

“They are essentially interested in the stage. They also asked Aleksandar Vučić to come last time, but it was a problem for them to be at that session… On average, they spent an hour and a half, two in the hall,” said Orlić.

He expects such a relationship in the upcoming session.

“The policy that the state leads, led by Aleksandar Vučić, that we implement in the Parliament is a policy that has no alternative, everything else is empty talk,” said Orlić.

He notes that the support of the majority of MPs is indisputable, but he does not expect wider unity on the issue of Kosovo and Metohija.

“My expectations are based on what they themselves say – that Vučić is a traitor, that there is no agreement and unity with him because he is the worst in the world,” said Orlić, assessing that the opposition is interested in unity to be against.

Snezana Paunović says that she wants to believe that this time she will not get into a situation where such an important topic comes down to collecting political points, because that will be a bad way to go.

He notes that Serbia is not facing a French-German proposal, but a European proposal.

“The lines of the SPS are no different from the red lines of the ruling majority and the state of Serbia at the moment, which is that there is no recognition, there is no blank permission to enter the UN and that the safety of the people living in Kosovo, but also the displaced – the priority of all priorities,” Paunović points out.

Zoran Lutovac says that DS will not go to consultations, because, he emphasizes, these are not consultations about how to solve a problem.

“They should leave the impression in the public that the president consults with other political actors in order to show that he consults with others on important political issues, while in fact they are conducting an independent policy all the time,” Lutovac said, adding that Vučić is out of his depth. powers “usurped the policy of the Government”.

Another reason for not going to the consultation with Vucic, he points out, is that the president received a ready-made proposal.

Boško Obradović assesses that Serbia is facing a new ultimatum established by the West.

“With the idea of ​​recognizing the fake state of Kosovo, enabling entry into the UN and renouncing part of our territory,” Obradović said.

He adds that the only possible response is to reject such a proposal, which he states is against our Constitution and Resolution 1244.

“We are for the reintegration of Kosovo and Metohija,” said Obradović and added that the question is whether the government will support, as he says, the “NATO proposal” or reject it and thereby, he points out, “not allow Kosovo to become an independent state with the support authorities from Belgrade”.

He says that the real consultations are the sessions of the Assembly of Serbia because, as he says, the people’s deputies must get information about what exactly is the content of this proposal.

“What is the problem if we achieve general national unity and we all together vote against that proposal. I am for that national unity,” Obradović said.

Obradović asked why they only talk about the consequences if we don’t accept, and they don’t talk about what will happen if we accept that proposal.

To that, Orlić stated that the opposition does not want consultations because, as he says, “they are not interested in the Kosovo and Metohija, nor in the Serbian people, nor in Serbia.”

Speaking about the situation in which Serbia finds itself, Orlović criticized the previous government, during which there were pogroms and the unilateral declaration of the so-called independence, as well as the release from prison of Aljbin Kurti and other prisoners.

“What is our state policy to blame for? That we strengthened the state and our positions in Kosovo and Metohija, that we secured 10 years of peace, including the Brussels Agreement,” said Orlić.

He pointed out that the president is calling for unity because it is the best for the country, and that the parliament is sending the wrong message because that call is rejected “with disgust”.

“Instead of sending a message that the entire Republic of Serbia is on Serbia’s side,” said Orlić.

However, Lutovac says that the first issue on which consensus should be reached is that we have a “normally organized democratic state in which order and order, the rule of law, social justice and political responsibility are known”.

“When Aleksandar Vučić was in the Parliament, he took and spoke non-stop for hours, accusing all his predecessors of everything and anything, and then called for unity. It looks something like this now – he calls for unity in the evening, and in the morning Ana Brnabić does what she is he worked in the Assembly,” said Lutovac.

Obradović assesses that an ultimatum has been set before Serbia, by which the West demands what has not been demanded of any country on the European road – to give up its territory.

“We have a Constitution that binds us… What can Vučić negotiate about when he swore to defend Kosovo and Kosovo with all his might as an integral part of the Republic of Serbia,” Obradović asked.

He says that there is also a different policy.

Speaking about his proposed solution, Obradović said that Serbia’s state institutions should be returned to Kosovo and Metohija.

“Let the topic return to the UN Security Council and if the American representative is already participating in the talks in Brussels, why not invite the Russian representative so that we have someone on our side,” Obradović said.

About withdrawing recognition and (un)realistic expectations

The door leader notes that more than half of the world’s countries and five EU members have not recognized the so-called independence of the Republic of Kosovo.

“I congratulate the current government on one thing – and that is the work to get a large number of world countries to withdraw the recognition of the fake state of Kosovo. And now we should accept it,” Obradović stated.

Paunović pointed out that it is pointless to say that the ruling majority is ready to allow Kosovo’s entry into the UN, and at the same time to praise the work on withdrawing recognition.

“It is very irresponsible to say that we should stop all talks, that elections should be called, knowing that the whole of Europe was silent when the referendum and elections could not be held on the territory of the Republic of Kosovo,” said Paunović and appealed that one should not try to profit on the tragedy of the Kosovo Serbs.

“It is not rational at this moment to expect Serbia, with all its good will, to call local elections in Kosovo and Metohija, let’s not fool the people. If we are talking about the return of 1,000 members of the military and police forces, does that decision depend on Belgrade or the KFOR commander according to Resolution 1244? Let’s not sweep the facts under the carpet in order to fool the people,” said Paunović.

ZSO – a prerequisite or part of the plan

When asked whether the formation of the ZSO is a prerequisite for further negotiations, Paunović answers:

“It is absolutely a prerequisite to enter into a conversation about this proposal. The JSO is part of the Brussels Agreement, even Vučić refused a priori that the JSO should be transferred to something that should be negotiations that will be conducted on this document as well”.

“We will not discuss anything before the ZSO is formed as one of the key items,” says Paunović.

Orlić notes that everything that is discussed is fundamentally very important, which also applies to ZSO.

“Which we have as a topic in general, just as we have KiM as a topic today – thanks to Aleksandar Vučić. ZSO is a prerequisite for anything further,” said Orlić.

He reminded that the former government also promised reintegration, that the negotiations were then transferred to Brussels, and that, as he states, the ROSU entered the north in 2011, and that the administrative line on Jarinj and Brnjak was established by the previous government.

Lutovac answers that the efforts to resolve the Kosovo and Kosovo issue democratically existed until the Kumanovo Agreement.

“The result of the Kumanovo Agreement is that Kosovo could no longer be decided within the framework of Serbia. Since then, the issue has moved to the international level,” says Lutovac.

He notes that the ZSO makes sense only if it is the initial stage of creating a “consociative status for Serbs”.

“This means that Serbs decide on key, vital issues that concern them independently. This is not foreseen by the Brussels Agreement,” said Lutovac.

“When we talk about the status, i.e. the situation in Kosovo and the position of the Serbs in Kosovo, we can establish a consociative model regardless of how the status will be resolved,” says Lutovac and notes that this requires “a negotiator with integrity.”

For Obradović, it is crucial on the basis of which the ZSO is formed.

“Is the ZSO formed according to the constitution and laws of the fake state of Kosovo, so you fight for human rights in a fake state, or is it formed in the state of Serbia? The only thing that can really help the Serbs in Kosovo is the return of the state of Serbia and its institutions,” he says. Obradovic.

He points out that Dveri is not in favor of terminating the negotiations, but in favor of transferring them to the UN Security Council and asks why the government is distancing itself from Russia.

Orlić emphasizes that the president adheres to the constitution.

“Our positions are protected by the red lines that he mentioned 500 times – to protect our national interests,” said Orlić.

When asked what solution they would like to see, the interlocutors answer:

“At this moment, we should work on normalization in parallel while working on the status. All the time we did not work on the normalization of relations, relations with the Albanians, tensions only rose and conflicts were incited,” said Lutovac.

“Fight, not capitulation,” says Obradović, reminding that our greatest wealth is in Kosovo and that we must not give up on it.

“We are obliged to look at it as responsible people – the fact is that yesterday they shot our man in the Kosovo and Metohija,” says Paunović, emphasizing that the SPS firmly stands by the position that Kosovo and Kosovo is part of Serbia, but that it will not mislead the people that everything will be solved if one man left power.

“We know what we need to do, to talk further, to continue our European path, i.e. all that it entails, because without that there is no life, no work, no money, no bread, nothing,” said Orlić.

He calls for hard work and finding a compromise with the Albanians that would enable lasting peace.