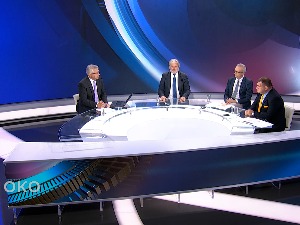 Conflict between Russia and Ukraine it has entered its seventh month, with no prospect of ending soon, but the question is how to wage war in the very difficult weather conditions brought by winter. On the economic front, perhaps the most important for the whole world, there is no progress for the better.

Historian Aleksandar Životić, a full professor at the Faculty of Philosophy in Belgrade, said in the show Oko that the penetration of the Ukrainian army in the east of the country cannot be called an offensive in the classical sense of the meaning of that term, but that it is a counterattack by the Ukrainian army that started from the Kharkiv region in the direction a very important land line of communication that goes to Izjum.

“There was a lot of speculation about what was happening in the Kherson region, whether offensive activity would be launched there. What is now quite clear is that it was a demonstration action, first of all, aimed at making the largest possible Russian forces attracted, to keep them nailed in that direction, and here to carry out an operation that was carried out in a rather elegant way. It can be seen that someone very talented planned this operation,” Životić assesses.

However, as he added, there has been a change in recent days, related to the attack from the south, which aims to surround Liman and a larger territory, which is now practically encircled by Ukrainian troops.

“It is obvious that, if the operation does not stop in the coming days, it will be at least one arm directed towards Lisičanska and Severodonjek”, says Životić.

Životić expects operations to stop at one of the natural barriers.

“The most likely thing at this moment is that in the foreseeable future, which is weeks, maybe even days, everything depends on the weather conditions, the operations in that area will be stopped at one of the natural barriers,” says Životić.

In the south, he adds, operations will most likely stop around the existing line or stop somewhere on the Dnieper as a natural barrier.

“We can safely expect that in the south the intensity of operations will take a little longer, given that the climate is drastically different and the composition of the soil is different,” explains Životić.

As for the allegations in the Western media, which speak of the downfall of the Russian army, Životić believes that it is too bold.

“According to what is being announced from both the Ukrainian and Russian sides, we are far from a turning point or a solution,” Životić said.

Journalist and diplomat Dragan Bisenić expects that Ukraine and climate change will occupy a significant part of the discussion at the session of the United Nations General Assembly.

For now, the Ukrainian side could see an effort to establish an international criminal court for war crimes in Ukraine.

“However, since neither Ukraine nor Russia is a signatory to the treaty on the Rome Tribunal, on that criminal court, then it will be difficult for this responsibility, if at all to be accepted, to be presented. Therefore, some solution similar to international criminal law will have to be sought to the court for the former Yugoslavia”, explains Bisenić.

The second effort of the Ukrainian delegation concerns the seized, that is, the frozen funds of Russia, somewhere around 300 million dollars, for which Kiev wants to be confiscated in some way and transferred to the fund for the reconstruction of Ukraine.

According to Bisenić, there is verbal support for this request, but in any case there are a lot of reservations due to the fact that Russia has already announced countermeasures in that case.

What happened in Samarkand

In the context of the events in the General Assembly of the United Nations, Bisenić points out that the expansion of the Shanghai Cooperation Organization, whose summit was held on September 15 and 16 in Samarkand, Uzbekistan, is surprising.

He states that a large number of countries have expressed their desire for either membership or observer status in that organization, which, he considers, is simply astonishing.

“These are the countries that actually gather 80 percent of the world’s population,” Bisenić points out.

Nikolić said that it is much more important for Russia that third world countries do not react negatively to what is happening now.

“I think that this is why Russia needs a low profile of this current event, so that too much attention is not paid to these events. Countries that do not support the US, do not support the fact that one country wants to annex the territory of another country, but they have negative experiences with the West, anti-colonial approach and the desire for a multilateral world, which is promoted at the summit of the Shanghai Organization,” says Nikolić.

Bisenić points to the possibility of creating an alternative to the United Nations.

“What happened now in Samarkand and the large number of interested countries may resemble the beginning of the creation of an alternative model or a backup model for the United Nations,” Bisenić believes.

Everything will depend on China, which is still technologically lagging behind the West, except in some areas, adds Nikolić.

Bisenić points out that China cannot withstand a conflict with the United States of America, if it is not together with Russia.

“China is a country that is easy to isolate, to impose isolation along sea routes. China cannot threaten with nuclear weapons,” explains Bisenić.

He points out that even US President Joseph Biden did not like what was happening in Samarkand, and that the spokesman of the White House also spoke about it.

“Biden went the furthest in his attitude towards China. He announced that the United States of America will go to war with China to protect Taiwan. He is the first American president to say that,” notes Bisenić.

What will Putin say in his address to the nation?

As for President Vladimir Putin’s address to the nation, which was announced for today and postponed until Tuesday, Nikolić believes that it could be some clarification regarding the referendums on joining Russia that are scheduled in the regions of Kherson, Zaporozhye, Lugansk and Donetsk.

On the other hand, adds Nikolić, it could be what many “hawks” are waiting for, who unrealistically hope that it could be a full mobilization, although a half-step is more likely.

Životić explains that, if those areas, viewed from the Russian side, become integral parts of the Russian Federation, any Ukrainian military operation against those territories would be considered aggression against Russia.

“In accordance with the Russian legal system, that would entail a certain way of reaction, including a military one. It would be declared not as a special operation, but as an aggressive war against the Russian Federation. The military doctrine is very clear and precisely assesses the procedures and what would happen in that case”, says Životić.

He states that what is important is the reaction of Turkey, which said that no changes to internationally recognized borders are out of the question, including Crimea.

Is it possible to declare a state of war in part of the territory?

“What comes from Russia as some kind of semi-information says that it would be possible to declare a state of war in certain border areas towards Ukraine,” says Životić.

He explains that in the event of the declaration of a state of war, the military authorities would receive much wider powers, as well as all other “apparatus of force”.