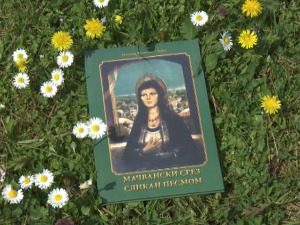 “She is as beautiful as Radetić Mara” – it is still said today in Macva, as a measure of female beauty. Mara, says the author of the book about her, Mihailo Sretenović, as if God himself created. Face white and smiling, lips red, eyes black as gar. Many rich people of the then Serbia fought for her hand, but she only wanted one.

“Stevo Dobrić. And there was a big problem, because she wanted to marry someone she loved in her village. Then there were various rumors that she would not marry Steve, but someone who thought she had money and could bribe it all. They even convinced that Steve to set fire to the shit. However, the head of the Macvan district was a very bright man, and I personally think that it was the writer Mihailo Sretenović, who saw through that intention and revealed with his people that Stojan Ribić and his son Jezdimir started the fire and Steva was saved that way. . There was also a wedding between Mara and Steve Dobrić. There were so many wedding guests, when the first cars entered Marina’s courtyard, the last ones left Dobrić’s courtyard “, says Miomir Filipović-Fića, a journalist from Radenković.

Not a single painting of Marina remained from that time, but according to the story that is passed from generation to generation, it was the embodiment of femininity, dignity and good behavior. That is why the street where she lived in Radenković bears her name.

“I’m in that street now and let’s say I’m running from there to see Mara. That’s how our people behaved and that’s how they loved her, and that’s how she was, “says Andrija Janković from Radenković.

The children at school talk about the history of the village, Marie and true human values.

“They don’t know much, but we try to convey to them what we have known since ancient times,” said Biljana Stanic, a teacher from Radenkovic.

The village of Radenković also gave the first doctor of mathematics, Mladen Berić, Prof. Dr. Milić Vićentić, who visited Zlatibor, and the famous photo reporter Risto Marijanović. However, the fate of these shores and plains, the locals say, is female beauty imbued with the character of the Mona Lisa from Macva, Radetić Mara.

Why does Kevin every time he goes to Dubai make this move “surprising”?

US intel boss Grenell roasts reporters as ‘too young’ to grasp Serbia-Kosovo deal, then explains it as a… ‘whole bunch of stuff’