370 graduates are tested in “Sami Frashëri”, two of them leave for copying 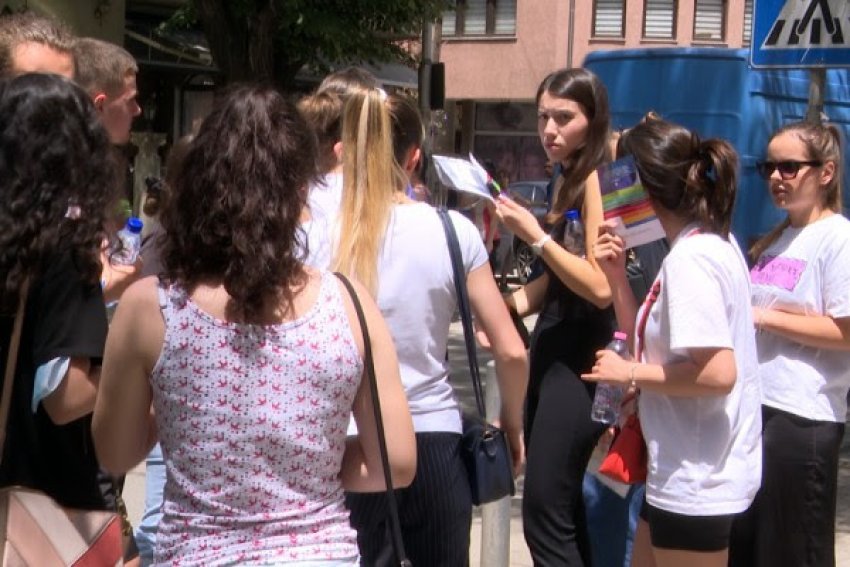 In the gymnasium “Sami Frashëri” in Prishtina today 370 students underwent the State Matura test. However, two of them were caught cheating, as they did not adhere to the testing rules. The test started at 10:00, while the deadline for submission of tests by graduates was at 13:00.

Graduate Elta Bajrami, who attended high school in the same school says for KosovaPress that the test was not difficult and that she expects success after the publication of the results.

Bajrami: It was an easy test, all the questions had a logical connection

“The test started at ten o’clock and went according to all the procedures since it was spoken. No rules have been violated, they have not even left us copies. It was an easy test, all the questions had logical correlations and we understood them based on the context of the test. It was not difficult … For the results, I personally expect to do well, I do not know, now the questions were logical, I worked but now we will see on July 5 when the results come out, what will happen “, she says.

While, for Florent Berisha, the expectations are not so good, as he says that the test questions were not easy.

Berisha: The test was difficult

“The test was a bit heavy, I did not expect it to be so heavy. But, mostly we finished it, I take it off. InshAllah 100 I do not want more … for the faculty I was looking if I can go to Engineering, but even if I can not here it is private … the stress was on that little sheet that is the most written, there I could “He made a mistake to make,” he said.

Graduate Blerim Krasniqi expects good results, as he hopes that he has managed to answer well the questions compiled.

Krasniqi: I believe I have completed the test well

“We just finished the test, it went well. We learned the cap and with our knowledge I believe we have asked those questions that we expected to have good … There was no problem, everything went according to plan and we hope that after a week or two when the results come out we will have after the good results “, he says.

The director of the gymnasium “Sami Frashëri”, Fetah Zejnullahu after the completion of the Matura test said in front of the media that today only in this school are tested 370 students.

Zejnullahu: The test procedure was at the desired standard level

In the “Sami Frashëri” gymnasium, today 348 students and 22 students with Turkish language instruction have taken the state matura exam, a total of 370. The administrators also passed the tests on time. I also believe that the procedure of holding the test has had the level of the desired standard during this time “, says Zejnullahu.

He further stated that there have been cases when students have lost the right to test, as they did not adhere to the rules.

Zejnullahu: Two students did not follow the rules and left

“Based on the information that I have, two of these students did not comply with the rules provided by the guidelines and even left the test …. I had an information from the Ministry of Education that a student allegedly in this school by name, according to the information that has made public. Out of 370 students on the list that I checked that are undergoing the test in the ‘Sami Frashëri’ gymnasium, such a student is not on the list. “It is propaganda, a student in the name of the high school probably did something,” he added.

He says that the test is a European standard and that Kosovo must pass this test.

Bajram Hashani, who was the administrator of the high school “Sami Frashëri”, said that in the class where he monitored the process everything went well, however there was a tendency to copy.

“Copy trends always exist but with better monitoring, with greater responsibility they are gradually reduced,” he said.

Over 23 thousand graduates have undergone today the State Matura exam, in 177 testing centers. According to the announcement of the Ministry of Education, the results of the state matura exam are expected to be announced on July 5.