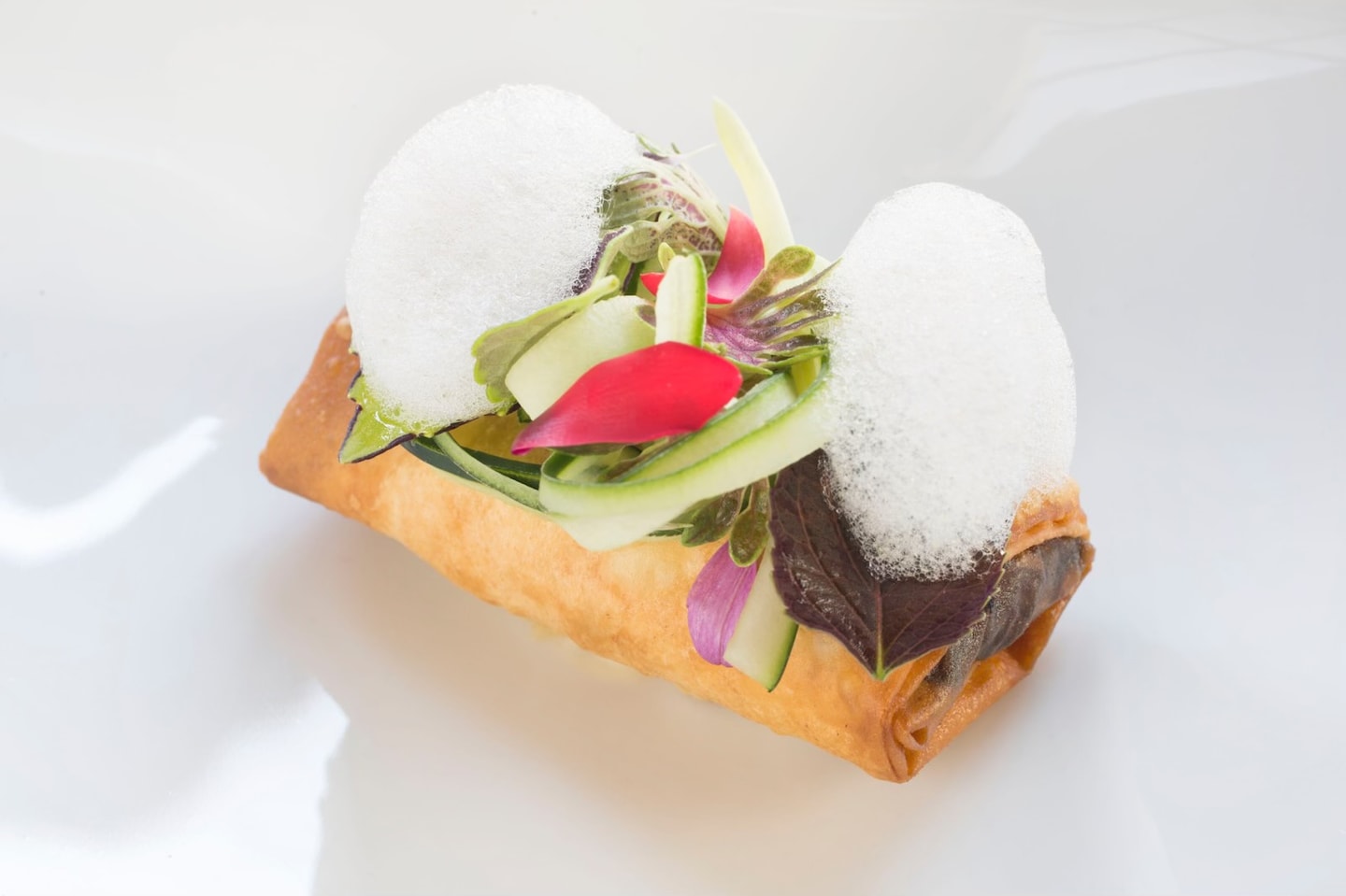 BELGRADE, Serbia — On a Wednesday night in late September, the dining room at Tisa was packed. It was only the fifth night of business for the modern, minimalist restaurant in Zvezdara district, but tables had been claimed for weeks.

The restaurant — all crisp lines, ash and pearl tones, blonde wood and rattan furniture — appeared to be a blend of Scandinavian design and jungle aesthetics. Everyone seemed to be celebrating something. Rounds of rakija, a Serbian fruit brandy, were delivered to tables. According to one waiter, customers were clamoring for the celery confit with truffle butter, rum and hazelnut.

Tisa is the third restaurant from Vanja Puskar, one of a growing number of chefs who’s applying modern techniques to the homestyle food of the region, fueling a nascent scene for New Balkan cuisine that stands in contrast to traditional kafanas, the cozy taverns known for heaping plates of pork and hearty peasant fare.

As Serbian rule changed hands over millennia, Belgrade has been devastated and rebuilt more than 40 times. With each abrupt transition, local foodways morph. But some things endure: the fertile fields, generous vineyards, mountainous farmland and fragrant forests of this once-republic of the former Yugoslavia.

For Puskar and others, collaboration is key. The chefs behind Belgrade’s new class of fine dining wax rhapsodic about working closely with the butchers, farmers and cheesemakers dotted throughout the countryside. They borrow from the playbook of New Nordic cuisine, the movement that gave rise to Noma, the Copenhagen restaurant held up as the apex of the genre.

The top travel destinations for 2023, according to experts

The world has noticed. Last year, the prestigious French restaurant guide Gault&Millau published the first guide to Serbia and declared Puskar the country’s Chef of the Year. And late in 2021, Michelin unveiled its first dining guide to Belgrade. The French tire company didn’t award any stars in Belgrade, but 14 restaurants were designated as “Michelin-recommended.” In early December last year, three more were added to the list.

And now’s as good a time as ever for dining-obsessed travelers to visit the Serbian capital. Twenty years ago, Reykjavik, Gothenburg and Oslo restaurants were minor league compared to the culinary heavy-hitters in Paris, Rome or Barcelona. The hungry, curious travelers willing to flout tradition veered north — and were richly rewarded. It’s not a stretch to imagine the same thing happening in the Balkans, especially given the favorable exchange rate for the Serbian dinar.

Here are just a few of the many innovative restaurants worth visiting in Belgrade.

Most people from the former Yugoslavia will tell you that dumplings were a staple of their diet growing up — and their grandmother’s were the best. At Iva, Puskar offers the stereo version of your grandma’s acoustic rendition. His trick? Plum seed oil he gets from natural-cosmetics makers. He makes plum seed flour for the dough, then adds a few drops of oil, infusing each morsel with an intense marzipan flavor.

“People like to say no foods come from the Balkans, that everything was brought here from elsewhere, but I disagree,” said Puskar, who was born in Bosnia. “The main ambassadors of our local cuisine are the ingredients. We just need to be using them to give more sophistication and complexity to every part of a dish.”

Iva is minimalist in design but maximalist in both flavor and bang for your buck. It also boasts Michelin’s Bib Gourmand award, an indication of excellent value. That’s on offer for breakfast, lunch and dinner. Even if you’re only in Belgrade for a few days, it’s easy — and acceptable — to become a regular here.

Your guide to planning a European vacation

The eggshell-white walls of Homa’s airy, high-ceilinged dining room are a fitting backdrop. The fewer distractions there are from the food, the better.

It’s all firmly rooted in a sense of place, specifically Ciric’s hometown of Pirot, about 200 miles southeast of Belgrade. Ottoman influences have mingled over time with Bulgarian and Macedonian elements in locals’ kitchens, he explains, but what makes his hometown’s food distinctive cannot be measured or reproduced.

“It’s a small city, and every house has its ranch,” he says, explaining that many people who live in the city keep a rural property with a garden and domesticated animals. “Mountains all around are each so unique and special because of the soil and grass and herbs. You can taste that coming through in the meat, milk and cheese. Even the wind that dries the smoked products is different wherever you are because it blows through a distinct microclimate.”

Milan Jovanovic started working in restaurants in Belgrade when he was 15. Now, 12 years later, he also counts kitchens in Dubai, Greece, France and Montenegro among his far-flung training grounds. As chef de cuisine at JaM (short for Just a Maestro) he brings a decidedly Italian style.

That makes sense considering the Italian influences on Montenegro, which sits just across the Adriatic from the heel of Italy’s boat. With starburst lighting fixtures, colorful mid-century modern furniture, terrazzo floors and a patio rimmed with lush greenery, the place feels plucked from southern Italy, circa 1965, and dropped squarely in the center of Dorcol, a neighborhood known for its abundant cafes and arty vibe.

Jovanovic’s stints in Adriatic seaside towns helped him build relationships with fishermen, so there’s regularly plenty of seafood on the menu at JaM. The raviolini, stuffed with spinach, eggplant and cheeses, has proved popular. But the signature dish here brings it all back to the Balkans: Duck breast is marinated for three hours then cooked sous vide, intensifying the flavors of local herbs.

Our 10 best city guides, according to readers

If you ask him about the rabbit confit cooked in duck fat, Misa Relic, the owner of Enso, will walk you through your first bite of the dish.

“You’ll get the saltiness of the rabbit, the sweet flavors of the banana curry yogurt ice cream and the crisp, sour zing of the veggies,” he says. “It’s one, two, three — and it all comes together.”

It’s no coincidence that Relic finds a rhythm with his descriptions. Located in an old theater, Enso shares a wall with BitefArtCafe, Relic’s high-energy nightclub. Enso is a term for a circle drawn with a single brushstroke, a Buddhist symbol.

“It represents the moment when the mind is free and the body can create,” Relic says. He has an aversion to fine-dining restaurants where the waiter tells you a story about every part of the meal. To him, dining is abstract and evocative.

To get to this opulent restaurant, you have to ascend a marble staircase. Situated in Belgrade’s Old Town, in a historic building that housed the first national bank, the Baroque dining room with art nouveau flourishes is an elaborate study in brass, marble and gold. The vaulted ceilings soar, but the most impressive design is on the plate.

Head chef David Simunic studied architecture before finding his calling in the kitchen. Like an avant-garde musician interpreting the standards, he deconstructs and reassembles familiar Balkan recipes.

To whit: sarma. The stuffed cabbage rolls, a fixture on Serbian family tables, are often presented with few flourishes and offered by the bowlful, but it gets elegant treatment in David’s hands. Traditionally the rolls are baked, but for him, tradition is simply the starting point. He constructs it by layering meat and sour cabbage and compressing it into a small block. It’s served with ajvar, a classic red-pepper sauce that he concentrates into a whispy paper-thin sheet.

“It’s a great thing to represent our cultural dishes on our menu,” he says. “Historically, Serbians like big plates full of food, but flavors are flavors, a recipe is a recipe. All you need to do is find a good combination for making it look good on the plate.”

Vegetables get glamorous treatment at the Square, located off the lobby in the posh, handsome Square Nine Hotel; A second Michelin-recommended restaurant, Ebisu, is a clubby Japanese outpost on the seventh floor.

Belgrade-born chef Dusan Todic has spent time cooking in the Netherlands and Mexico, but it was his experience in San Diego kitchens, from 2015 to 2021, that most influenced the menu at the Square.

“California made me see the connection between the farm and the restaurant. To me, it’s the only way that makes sense. It’s the only way to work,” he said. Autumn, then, brings a bonanza of mushrooms. Oyster mushrooms create a baseline in a medley of prawn gratin, black garlic and kale while black truffles elevate a mix of sunchokes, raisins, smoked bacon and parmesan.

The local accent is even heavier at the bar, which offers rakijas made especially for the hotel. The native fruit brandy comes in a pear and two grape varieties. They also offer several sljivovicas, or plum rakijas, a spirit so traditional that it was inscribed in the UNESCO List of Intangible Cultural Heritage in December. Close your eyes, take a whiff and the high-definition fruit aromas will place you squarely in a mountainside orchard.