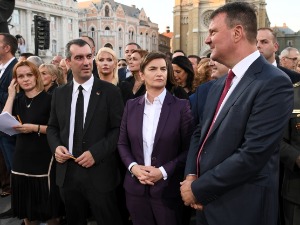 “Today we remember the brutal ethnic cleansing committed against the Serbs in Croatia, when more than a quarter of a million of our compatriots were expelled from their centuries-old homelands. Several thousand of them did not manage to survive this crime, while many of them are still missing today.” Brnabić said.

He points out that “we are not dreaming that we will change someone’s view of the events from the end of the last century, nor that the Serbian victims will receive the respect and justice they deserve”.

“It is our right to remember, remember them and protect them from oblivion,” Brnabić wrote on Instagram.

“I am proud that tonight in Novi Sad we all gathered together, representatives of Serbs from the entire region, to peacefully and dignify this date, which will remain forever written in black letters in our calendar,” added Brnabić.

The Prime Minister also stated that today’s Serbia, led by President Aleksandar Vučić, is the biggest guarantor of peace and stability in the Balkans.

“Our country, as it is today, is the biggest and most reliable support for its people and provides a clear vision that our future is bright, based on economic progress, economic prosperity and stability. At the same time, we remember our history with pride, we remember our suffering and the crimes we suffered and we protect the Serbian victims from oblivion,” Brnabić wrote.

She added that Serbia is fully focused on the future, at the same time determined to never forget its past.

“We are permanently determined for peace and stability, but also for remembering our victims and not allowing their fate to never, ever happen again,” concluded the prime minister.

Prime Minister Brnabić attended the commemoration of the 27th anniversary of the “Storm” action in Novi Sad.