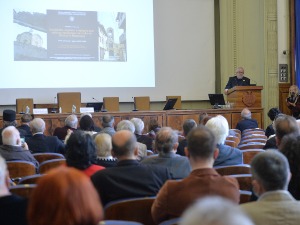 Maja Gojković pointed out that our cultural treasure in Kosovo and Metohija has been exposed to various types of violence and threats, open attacks and physical destruction, as well as daily campaigns and pressures, attempts to erase and falsify them for decades and until today.

“In the period from 1999 until today, a part of the Serbian medieval spiritual and cultural heritage essential for our history has been irreversibly destroyed. Time has shown that the temporary institutions of self-government lack the expertise and will to take care of the Serbian cultural heritage,” they said. The most obvious example is the March 2004 pogrom, when numerous monasteries and churches were demolished, burned and desecrated, and 10,000 frescoes, icons and many other valuable relics and church books were permanently destroyed and disappeared. ” Gojkovic said, adding that recent demands for the Serbian monastery to be removed from the World Heritage List are in danger, sounding at least cynical.

The Minister assessed that the preservation of our cultural heritage is one of the conditions for the survival of the Serbian people in Kosovo and Metohija and is one of the priorities of our country’s cultural policy.

She added that in the defense against numerous forgeries, fabrications and abuses, it is important that our eminent experts in the field of protection of monumental heritage, historical sciences, ethnology, linguistics and legal sciences express their position and contribute to the defense of the truth.

Gojković emphasized that we are increasingly witnessing the so-called “soft” pressure on our religious and cultural heritage.

“One such example happened in August 2019, on the remains of the Orthodox Church of St. Nicholas in Novo Brdo. The so-called Kosovo flag was hoisted there, the ‘Days of Artane’ event was held and a Roman Catholic Mass was served on the foundations of the Orthodox church. in order to promote the medieval town of Novo Brdo as an ethnically Albanian site. Moreover, all this took place in a special protected zone that includes Serbian medieval cultural, historical and religious monuments, “Gojkovic said.

As she stated, another drastic example is the construction of a road that would connect Kosovo and Metohija with Montenegro.

“By the decision of Pristina, that road was traced right next to the Visoki Decani monastery. This would directly endanger the endowment of King Stefan Decani from the 14th century, which enjoys the status of world cultural heritage. In parallel with the construction of the road, local government representatives “Pristina, which decided to return 24 hectares of land to the monastery of Visoki Decani,” said Gojković.

According to her, “all those who aspire to our cultural heritage count on the fact that erasing the material traces of the existence of a nation over time permanently destroys its memory and identity.”

“However, what no attempt to steal history and identity can erase is the deep-rooted awareness of the cultural roots of our people. Hence the determination to nurture and preserve the awareness of the greatness of our shrines, together with material monuments,” Gojkovic said.

The president of SANU, Vladimir Kostić, pointed out that the Academy, interrupted by the pandemic, ambitiously launched a project called “Serbian question”.

“The wish is that with the presence of SANU members, with the participation of relevant institutions as is the case today and individuals, issues of vital importance for this society, people and state are raised. It was clear that in such plans, the problems in Kosovo and Metohija will be the priority of all priorities.” “, Kostic pointed out.

He emphasized that today’s gathering was postponed by the pandemic several times.

“Faced with denying provocations and taking away the essence of that heritage, we realized that there is no more time to delay. We have over 30 participants in the gathering, from whom we will surely learn a lot,” Kostic concluded.

Residents remain amazed: A bat appears in the center of Prishtina