A prayer for the sanctity of marriage and household was served in entrance of the Church of St. Sava 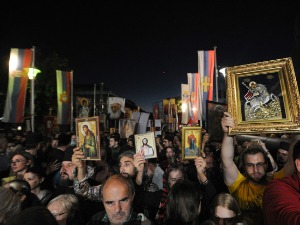 Along with Patriarch Porfiri, there were Bishop Teodosije of Raška-Prizren, Bishop Irinej of Bačka, Bishop Jovan of Šumadija, as well as several archbishops.

Patriarch Porphyry addressed the citizens after the prayer and said that the believers were gathered to the prayer by the thought and desire “to be what we are and what our ancestors were and to be our children, to be what is the will of God, not what what people are trying to get”.

“We do not impose our way of life on anyone, but we also do not want anyone from any part of the world to impose our values, worldview and way of life, even if they think they are better than us, and that anyone says what we should be, because Christ gives us directions and tells us what is good and what is not, what is black and what is white and what God has established as natural and what is unnatural,” the patriarch said.

“God created man as two sexes – male and female and blessed marriage as the union of a man and a woman with their children,” said the patriarch and added that “we know what is male and what is female, and thanks to our faith we know what is marriage, but we are faced with waves of new value systems that are emerging under the radar to establish a new paradigm”.

He pointed out that God gave man freedom, but that not every freedom is salutary and meaningful to him, and that is why “LGBTQ+ ideology is unacceptable for Orthodox Christians”.

“At the same time, we are against any kind of violence, contempt, hatred, persecution and branding and those who share these ideas, especially if the violence is carried out in the name of the church, moreover… We do not judge them, we do not accuse them and we do not condemn them, God is the judge of all , we are already praying that they will come to the words of Christ,” said the patriarch.

According to him, “lessons that propagate gender ideology have been inserted into the textbooks of primary and secondary schools” and we ask the competent authorities to immediately withdraw from use all textbooks in which there are such lessons.

“We are against the so-called Europride and parading through the streets of Belgrade, such manifestations, with their exhibitionist behavior and their visual and aesthetic aggression, insult and mock everything that is considered the most sacred and virtuous in our nation. It is obvious that it is not just about walking and partying, but that it is reshaping our values and way of life, without us asking for it,” the patriarch emphasized.

He emphasized that the church is not conducting any kind of crusade against the LGBT population, as some say.

He pointed out that “we did not go to another country to impose our values ​​by force and we do not lead crusades, but others came to our house and propagate their ideas, we are exposed to violence, they force our minds and souls, they would like to, but they will not be able to”.

A large number of clergy, monks and believers responded to the invitation of the Holy Synod of Bishops of the Serbian Orthodox Church.

On the eve of the prayer service, a liturgy called “For the salvation of Serbia” was held. Litija marched in front of the Patriarchate at 6 p.m. through the main streets of the city.

During the walk, the Serbian flag was unfurled and carried by the participants of the litia.

The reason for organizing the procession and prayer is the attitude of the Serbian Orthodox Church towards the holding of Europride. Patriarch Porfirius said yes a few days ago considers it correct to cancel that event in Belgrade.