A state of emergency was declared in Pirot, greater than 50 folks have been hospitalized after a wagon with ammonia overturned 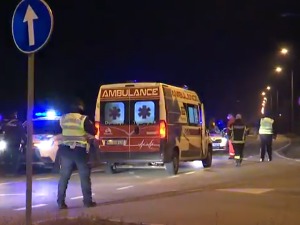 Your browser does not support the video tag.

Divac: Inspectors on the field in the morning, the commission will determine the cause of the accident

Acting Assistant Minister of Construction, Transport and Infrastructure Ivan Divac says that the inspectors of the Department for Inspection of Dangerous Goods Transport of the relevant ministry will be on the ground in Pirot tomorrow morning and will take all measures within their competence to determine whether there were any irregularities during transport of ammonia from Bulgaria to Šabac.

Divac stated that the companies “Railway Infrastructure of Serbia” and “Srbija Kargo” formed a joint commission that will determine the cause of the accident.

“The inspectors of the Railway Traffic Inspection Department will, until receiving the commission’s report, take measures within their jurisdiction regarding the control of the vehicles involved in the accident,” added Divac.

He also stated that the sender of the dangerous goods was the Bulgarian company Agropolychim, and the recipient was “Elixir Zorka džubriva DOO Šabac”, while the goods were transported by the company “Srbija Kargo”.

Eight patients at UKC Nis, all are in a stable condition

Eight patients have been admitted to the Nis University Clinical Center. A total of ten people were admitted, and two were released for home treatment, RTS was told. All are stable.

The mayor of Pirot, Vladan Vasić, declared a state of emergency in the city, after a wagon with a composition transporting ammonia overturned.

As a result of the ammonia leak, 51 people were hospitalized in Pirot, and due to the emergency situation, schools in that town will not work tomorrow, Vasić said at an extraordinary press conference.

In his address, Vasić called on the citizens of Piro to respect the necessary measures.

“For now, the main recommendation is that people don’t leave their homes, don’t turn on air conditioners, that is, don’t bring outside air into the house and don’t open windows. Let’s wait for the weather to do its thing and for that cloud of ammonia to pass over Pirot “, stated Vasic.

As he emphasized, it is unfavorable that the tanker probably slipped into the river Nišava, so there will probably be consequences for the flora and fauna in the river itself, downstream.

“The reaction of ammonia and water creates thick smoke, so it is difficult to approach the location itself. We have prepared an order to suspend the work of schools and all institutions tomorrow, Monday in the first shift, although we will recommend the suspension of work for the whole day for the schools.” Mayor Pirot added.

The wagon fell into the riverbed of Nišava

RTS learned from the MUP that the accident occurred when a group of 20 tanks fell off the tracks, at least one of which fell into the Nišava river bed, which caused a violent reaction of ammonia in contact with water.

Railway traffic is interrupted. Due to poor visibility, the traffic between Pirot and Bela Palanka is interrupted both on the highway and on the main road.

The carriage of a freight train carrying ammonia slipped around 5:30 p.m. on the section of the railway from Pirot to the village of Stanicenje near the town of Sopotski han, the MUP announced.

RTS learned from the MUP that the accident occurred when a group of 20 tanks fell off the tracks, at least one of which fell into the Nišava river bed, which caused a violent reaction of ammonia in contact with water.

Fifty-one people were hospitalized due to symptoms of ammonia poisoning.

RTS was previously told at the Niš University Clinical Center that eight people were admitted to that health institution. All of them have stable vital parameters with irritant symptoms and mild chemical burns.

The MUP urges citizens living nearby not to leave their homes or go outside.

27 firefighters with 10 vehicles were dispatched to the scene.

Due to poor visibility, the traffic between Pirot and Bela Palanka on the highway and main road is interrupted, and the alternative route is through the village of Ponor, the statement added.

Workers of the second shift in the “Tigar Tires” company were evacuated, and the third shift will not come to work.

The company “Srbija Kargo” announced itself and announced that it is a freight train that runs daily on the Niš-Dimitrovgad section, transporting raw materials from Bulgaria to Prahovo and Šabac.

The freight composition included twenty tank wagons, which are owned by the Elixir company.

The joint railway commission for the investigation of extraordinary events of the Railway Infrastructure of Serbia and “Srbija Karga” will determine the cause of this accident, according to the announcement.

NVIDIA GeForce RTX 4070 Ti is already on sale in Serbia, costs 1400 US Dollars