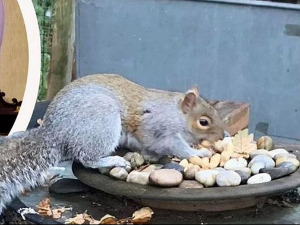 The citizens of the Welsh town of Buckley named the aggressive animal “psycho squirrel” or “Stripe” after one of the most aggressive Gremlins.

The squirrel completely randomly attacked people, be it pensioners, children and pets, throwing themselves at them while they were dumping garbage, she even knew that he was chasing them through the streets.

Some went through bites, bruises and bleeding. Some also had to receive a tetanus vaccine.

People warned their fellow citizens about the wild squirrel through social networks.

One of the residents posted on Facebook: “Warning, vicious squirrel attack. She bit me, attacked my friend … and many other people. He attacked both my and my neighbor’s cats. “They do not dare to leave the house,” the announcement reads.

Some published photos of their wounds.

Forty-eight hours of tyranny of this squirrel finally ended when she was trapped by 65-year-old Corinne Reynolds, who is known in the local community as someone who takes care of animals.

Despite making friends with a wild squirrel, Korin decided to hand her over to the competent service after she bit her arm as well.

“Stripe” had to be put to sleep because the law does not allow gray squirrels to return to the wild if they are caught by the competent services.

Corinne admitted that it was very difficult for her to hand over the animal to the authorities, but that she did not want to put her grandson and other people at risk of attacking and biting them.