A woman below me had passed away 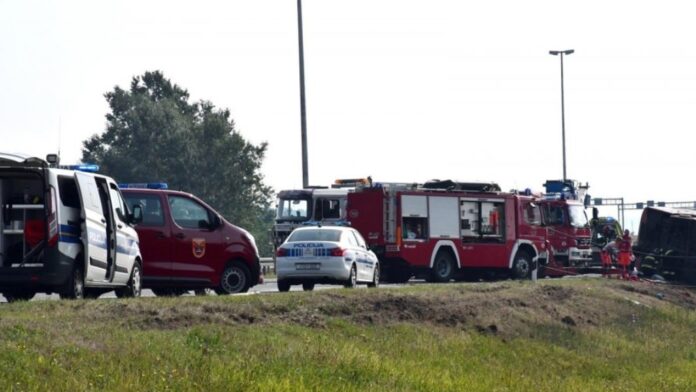 In the serious accident in Slavonski Brod, Croatia, respectively on the A3 highway, 10 people who were on the bus from Kosovo lost their lives, where 44 others were sent urgently to the hospital for treatment, of which 15 with serious injuries. .

Among the dozens of survivors is Ramë Gashi, whose wife Kada was hospitalized in Brod hospital due to a chest injury, and is expected to be admitted to the operating room for surgery, Telegrafi reports.

“The trip was good, even fun, we slept around 5 in the morning, since on the first floor the youth sang and had fun all night.

As soon as I fell asleep I heard a noise that woke me up immediately.

Everything happened in a few seconds.

I saw myself flying up and down, various things falling on us, the seats were broken, squeezing the hands of the passengers.

There I realized that a woman who was below me had died.

“People ended up lying on top of each other, and the hardest thing I had was when I saw the young people who had lost their lives”, Ramë Gashi, who survived the terrible accident, added for Jutarnji List.

“I started looking for the woman who was sitting with a friend, and when I found her I went outside to help others, as I had not suffered any serious physical injuries,” Gashi added.

He and his wife were traveling from Mannheim, Germany, and their final destination was Mitrovica.

They had gone on vacation.

“I did not want to go at all, but she persuaded me to travel with her by bus.

I was traveling by plane, as the flight from Stuttgart to Pristina takes only an hour and a half, but she insisted that we travel by bus.

. “I will never forget this moment”, Gashi said at the end. / Telegraphy /

A meteor illuminates the night time sky over Norway, consultants are looking for the stays