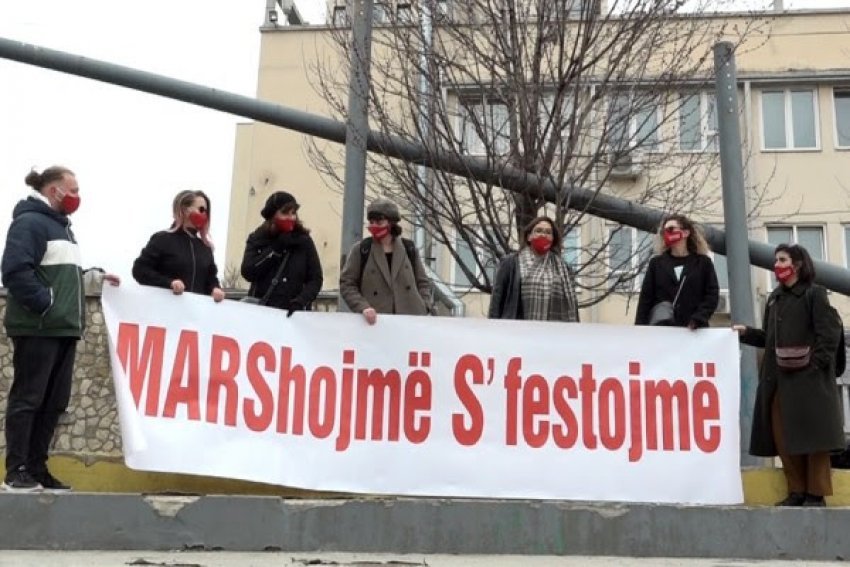 With the motto “We march against the patriarchy that kills” this year in Kosovo will be marked International Women’s Day. The collective “We march, we do not celebrate”, composed of activists of civil society organizations and students, will carry out the march on Monday, March 8, through the streets of the capital, an activity that will be supported by activists in 15 other municipalities. All this aims to return the attention of institutions to cases of violence against women to be treated with priority.

All women killed as a result of the violence will be commemorated on March 8 and justice will be sought in all cases.

From the square “Zahir Pajaziti” in Pristina, on Monday from 12:00 will march in search of a life without violence and for a free and equal society. While others who want to join the call, can place on the balconies of their homes sheets in which they describe the fight against oppression that takes place inside and outside their homes.

Adelina Tërshani from the collective “We march, we do not celebrate”, in a press conference, announced that 15 other municipalities have joined the March 8 initiative.

Tërshani: We will target all the violence that is happening against women just for the fact that they are women

“We have decided to target all the violence and killings that are happening against women just for the fact that they are women. We will march as always in Prishtina, but in this initiative many other municipalities in the cities of Kosovo join “, she said.

She said that they aim to raise the attention of the institutions so that cases of violence against women are treated with priority.

Tërshani: We will protest and demand the basic rights of women

“Many times we see that even when women and girls are victims of husbands or other family members, when they die at the hands of their husbands, there have been many times when they have reported violence several times in institutions but have not found support. “Once again, with the march, we turn our attention to the institutions that these cases should be treated with priority and seriousness, otherwise we will continue to protest, we will continue to demand the basic rights of women, whether economic or political,” she said.

During the march, sheets with inscriptions containing concrete calls and targeting violence and killings against women during 2020 will be unfurled in institutions.

“Against the patriarchy that kills” are invited all citizens to be part of this activity, where the organizers said that anti-covid measures will be respected.

100 thousand refugees entered the US in February, Trump “explodes” against Biden – Latest News