Ahmeti: We should make all of the desires of the heroes come true 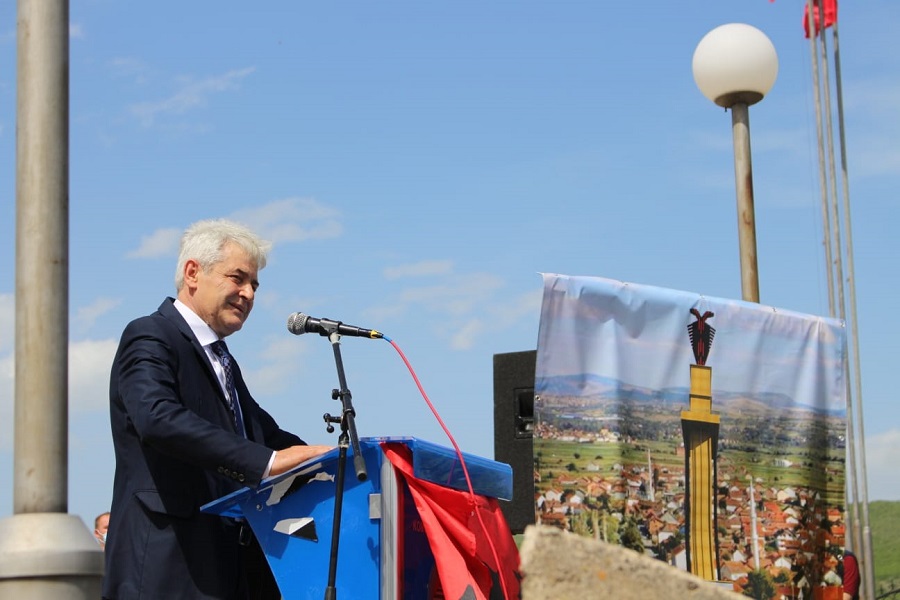 The President of the Democratic Union for Integration, Ali Ahmeti, accompanied by senior officials of his party, ministers and MPs, today in Slupcan marked the 20th anniversary of the beginning of the KLA war and the declaration of the free zone of Karadak.

In this manifestation attended by families of martyrs, veterans, representatives of the former KLA and other personalities, President Ahmeti laid the foundation stone of the Memorial Tower which is being erected in memory of the brightest history of this country and this area. , and in particular in commemorating the heroism of Albanian mothers, who have stood stoically in support of the KLA.

Ahmeti said that today is being rounded 20 years that this country resounded with grenades, rocket launchers, but this area and this people stood heroically lined up like a caricature in front of all the aggressors.

“Today is a special day, we must commemorate all the fallen, from the leaders of the army to the youngest soldiers. This monument that we are laying the foundation stone today, is being erected in memory of the brightest history of this country and this area, you are eternally erected to remember them because their blood was a light for us and the people. This monument is being erected in memory of the mothers of the entire municipality of Lipkovo, women, sisters. We did not lose the war in front of the opponents we had, we here lost the war with mothers, sisters and women who did not come out of the trenches despite our prayers and ultimatums, they gave the most authentic example of the Albanian mother who has historically been lined up for freedom , justice and equality, therefore this monument is dedicated to them. There are great responsibilities ahead of us, we must make all the dreams of heroes and martyrs come true. We have achieved a lot, but there is still a lot of work ahead of us. Our efforts, our commitment will never stop in realizing the ideals of whole generations who have sacrificed and worked for better and whiter days, therefore not only on the anniversary, but in every moment we remember all those generations, we remember all those who fought and fell so that their deeds would not be stalled but would be lived and materialized as befits them. Therefore, I wish you good work, the mayor, all you area leaders, MPs, government officials, ministers to show solidarity and as soon as we agreed that on the flag day the mayor will inaugurate this monument where he will “This important monument is represented and will be seen from above,” he said.

The first tourists in Saranda, Kosovars vacationing in the south before the season starts – Latest News