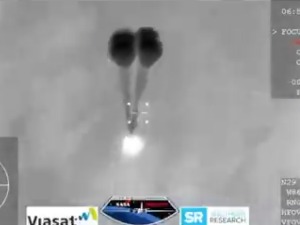 Senator Bill Nelson, the administrator for NASA, said at the reception: “We have made another incredible space flight for America and our commercial and international partners. Safe, reliable transportation to the International Space Station is exactly the vision that NASA had when the agency embarked on a commercial flight program. ”

The joint mission of NASA and “Space Ex”, owned by Ilona Mask, has begun by launching “Falcon 9” November 15, 2020 from the Kennedy Space Center in Florida.

The team of astronauts arrived at the International Space Station on November 16, almost 27 hours after departure.

During the mission, the astronauts engaged in research work – from studying the development of proteins in the laboratory, to demonstrating the technologies of robotic assistants.

The astronauts also made hundreds of images of the Earth as part of the mission.

At the beginning of the year, they played a significant role in five space walks outside the lab.

During space walks, the astronauts connected the cables to the recently installed scientific platform “Bartolomeo”, serviced the station’s cooling system and completed other tasks of maintaining the station.

They spent a total of 167 days in the mission, thus breaking the record from 1974, when NASA’s mission lasted 84 days.

Ahmeti: We should make all of the desires of the heroes come true