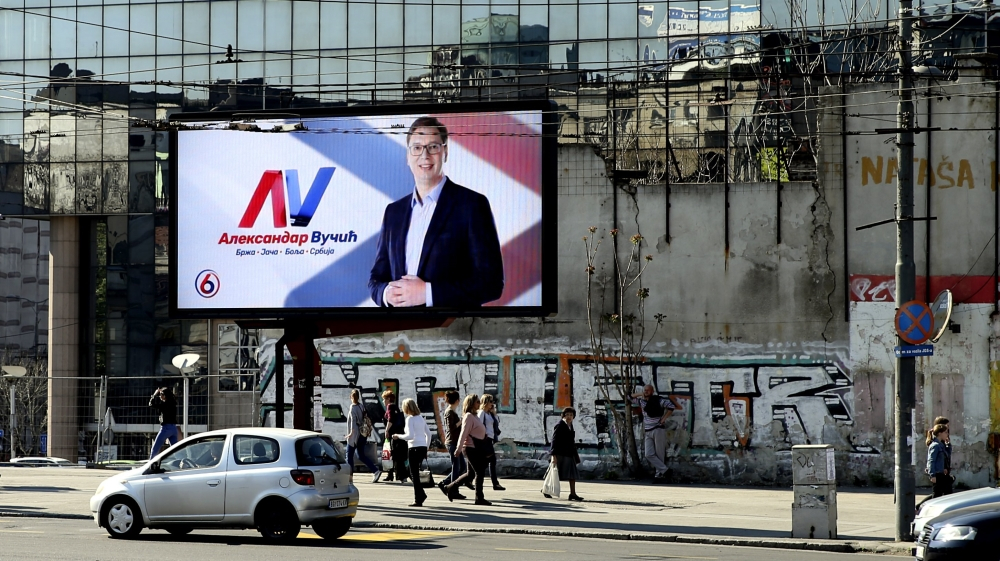 Serbia’s conservative Prime Minister Aleksandar Vucic will win the country’s presidential elections with a landslide, according to an exit poll.

Based on nearly half of the votes from a sample of polling stations, the Ipsos agency predicted that Vucic would get 55.8 percent of the vote, with opposition candidate Sasa Jankovic taking second place with around 15 percent.

The poll group had previously forecast that Vucic would receive 58.1 percent of the vote.

“This is a very important day for us and it shows which way Serbia should go,” Vucic, 47, told supporters at his right-wing party headquarters after the exit poll was announced.

“Serbia will stay on the European and reformist path, but will also be friends with Russia and China.”

Vucic said he would remain prime minister for two more months before he becomes head of state.

He also expressed “special thanks” to the German Chancellor Angela Merkel and the Russian President Vladimir Putin, who had met with him last month.

If the projection is confirmed during the official census, Vucic will cement the post straight away without facing a second-round runoff.

To win the first ballot, a candidate must win more than 50 percent of the vote. Official results are not expected before Monday.

Al Jazeera’s Sonia Gallego reported from the capital Belgrade and said Vucic’s victory was as forecast.

“The opposition fears that Vucic will use the position to further consolidate his power, but it all depends on whether he wins outright and if he gives up his political party if he takes on that role,” she said.

The post of president has been largely ceremonial lately, but analysts believe it would be a much more influential position if Vucic were taken.

Vucic’s opponents say he has embarked on an authoritarian streak that has led him to take control of the media in Serbia since his party came to power in 2012 and he became prime minister three years ago.

In the week leading up to the vote, national television channels Vucic devoted 51 percent of their airtime, more than all the other candidates combined, according to an analysis by the research agency Kliping published in the daily Danas.

That would be 67 percent if his appearances as prime minister were taken into account, the analysis added.

On Thursday, the last day of the campaign, all but two of the dozen or so national newspapers appeared in full-page advertisements with the inscription: “Give Aleksandar Vucic a decisive voice on April 2nd”.

Vucic, a trained lawyer, joined the far-right Serbian Radical Party in 1993 and soon became one of its top officials, known for his harsh speeches.

He vehemently defended the actions of the Serbian ethnic leaders during the 1992-95 war in Bosnia.

“If you kill a Serb, we will kill 100 Muslims,” ​​he said in July 1995, just days after Bosnian Serbs killed almost 8,000 Muslim men and boys in the Srebrenica massacre.

In 2008 he announced that he had split off from the radicals to form the center-right progressives with outgoing President Tomislav Nikolic.