All members are identified "All-old" – Jokić and Dončić starters, Vučević from the bench, Booker "izvisio" 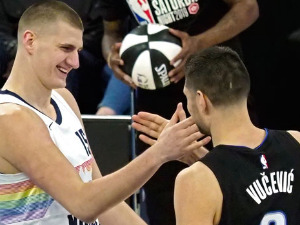 The strongest club basketball championship in the world announced the list of the remaining 14 players who will participate in "Ol star" match in Atlanta.

The players from the bench that captains LeBron James and Kevin Durant will be able to choose are:

The basketball players who will participate in a kind of NBA league event for the first time are Brown from Boston, Avalanche from Chicago, Williamson from New Orleans and Randle from New York.

Players who, to the surprise of many, were not on the reserve list "Ol star" the matches are definitely Devin Booker and Mike Conley.

However, as Anthony Davis is injured and will not be able to participate, the league is expected to determine his replacement, and that could be one of the two mentioned who are not on the original list.

Before the match of all the stars, there will be a competition in skills, as well as a quick shooting of threes, while the competition in dunks will be held at half time.

Bejtullahu from GERMIN: The process of counting votes from abroad is slow, so far 28 percent of them have been rejected – Latest News