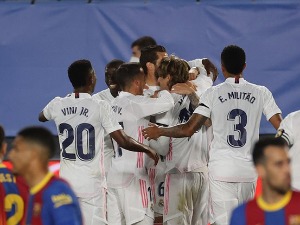 The biggest derby in world football, the duel between Real and Barcelona, ​​fully lived up to expectations. The “Royal” club was a better rival and deservedly won – 2: 1.

It is a real pity that the audience could not attend the game played at the “Alfredo di Stefano” stadium, but the players of both teams did not mind giving a fantastic football show and showing everything that makes this sport “the most important sideline in the world”.

The importance of the match forced two coaches, Zinedine Zidane and Ronald Kuman, to perform extremely offensive formations on the field, which reflected on the quality of the match, and in such a game Real did better and won points worth maybe even titles.

From the beginning of the match, the game was played openly on both sides, and Real was the first to threaten more seriously and scored a goal immediately. Valverde withdrew the attack very well, added to the side to Lucas, who sent a cross shot on the ground, and Benzema reacted brilliantly and shook Ter Stegen’s net with his heel.

Barça tried to take the initiative, and Real threatened from the counter. After one quick attack, Vinicius was knocked down on the edge of the penalty area, and Tony Cross successfully took a free kick for 2: 0 in the 27th minute.

Barça had no luck with Cross’s goal, as the ball hit two Blaugrana players before entering the goal, but it did in the 33rd minute, when Valverde finished Real’s fantastic counter-attack with a powerful shot, but the ball ended up on Ter Stegen’s goal post.

Barça had the best opportunities in the first part in the stoppage time. First, Messi tried to beat Courtois directly from the corner, but he hit the post, and only 30 seconds later, the Argentine tried again, this time the Belgian goalkeeper defended his shot with his foot.

Kuman started the second half with Griezmann on the field. The Frenchman’s contribution became concrete in the 60th minute, when the former Athletic player missed the ball to Oscar Mingezi, who is doing great and reduces the score to 2: 1.

In the greater part of the second half, it rained extremely hard in Madrid, but the players of both teams still managed to make several chances.

Zidane decided to “close” the match 20 minutes before the end, he took Benzema and Vinicius out of the game, instead of which Mariano and Isco got the opportunity.

The guests were looking for a penalty in the 84th minute, after the duel between Mendy and Brightwhite, but referee Jesus Hill Manzano just waved his hand away.

In the 90th minute, Real was left with a player less on the field. Kazemiro received a yellow card twice in one minute, so Judge Manzano sent him to the locker room.

In the last seconds of the match, young Ilais could have been the hero of Barcelona, ​​but his shot ended up on the crossbar of Real’s goal.

Real celebrated for the third time in a row in El Clásico and thus came to the first place on the table with 66 points won, as much as Atletico has with a match less (on Sunday against Betis away).

Barcelona remained third with one point less than the Madrid duo.