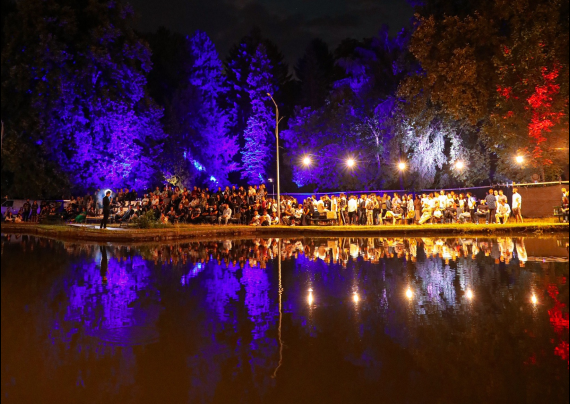 This Friday, the international animation festival “Anibar” started its 12th edition. As it is announced in the press release, the opening ceremony of this festival was held at the “Lake” Cinema, where many animated film lovers, local and international celebrities were present.

This year, considering the situation created by the pandemic, the organizers bring the festival in a hybrid version, where the screening of animated films will be done via the Internet, but the festival will open its doors again in the city of Peja for all those who want to be present.

This edition is an invitation to all creators and visitors to enjoy a space more than necessary leaving behind the pandemic and the effects that isolation has brought to us. It is worth mentioning that all activities during the festival will be conducted in accordance with the measures against the distribution of COVID-19 imposed by the institutions.

It is exactly the situation with the pandemic which inspired the organizers of the festival that this year this edition has as its theme isolation. This edition is dedicated to telling stories of isolation through animation as a creative medium. An edition where the isolation in its entirety will be explored, with all its nuances, the artistic isolation, the isolation that the citizens of the state of Kosovo have been experiencing for many years now due to the lack of visas.

The International Animated Film Festival comes with a very rich program of 300 films, from 1413 submitted, from all over the world. The films are divided into nine categories, six of which are competitive: International Competition, Student Competition, Balkan Competition, Animated Video Music Competition, Feature Film Competition and the Human Rights Category and three other non-competitive categories: Out-of-Race Panorama and Children and Youth Program. In addition to the screening of animated films, like any other edition this year there will be other programs, which include five presentations, four workshops and six panels. As in previous years, special guests will come together to offer their knowledge about the animation industry.

World-renowned personalities, Oscar winners, animators of the most prestigious series around the world, will gather to share their experience with you, through the various media of the festival.

Anibar this year also brought the music program, where it will perform many artists such as: Water without Gas, Yll Megi, Zëada, Eptan, Stratos, Elsa Rraqi & Ilir Bajri, Florent V, Altin Boshnjaku and Ashikët of Gjakova.

This edition of the festival ends on July 30th. Welcome to our cinemas in Peja, while virtually, visitors can watch all the movies on our digital platform at online.anibar.org.