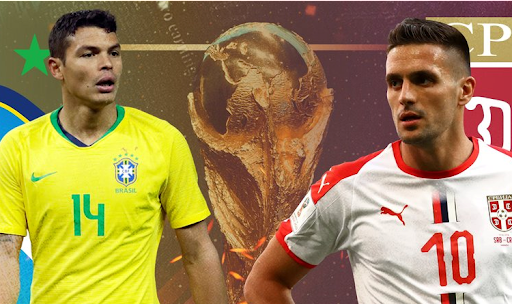 Brazil will meet with Serbia in the FIFA World Cup 2022 first group match at the Lusail Stadium. The fixture will take place on November 25, beginning at 00:30 IST.

The Brazilian team is the most titled team in the history of FIFA World Cups. They have won the Mundial 5 times (in 1958, 1962, 1970, 1994 and 2002), and twice were one step away from the trophy (1950, 1998). Germany and Italy, who have four World Cup gold medals each, are breathing down their necks. However, their triumphant era ended long time ago while there is no doubt that Tite’s men will try hard to repeat the success of 20 years ago, especially since the current generation of the team is very impressive in terms of players: a mixture of experienced seniors players like Thiago Silva and promising youth like Gabriel Martinelli. Moreover, Neymar is approaching the tournament in robust form, despite his rather frequent injuries at the most important recent major tournaments.

As it was expected, the Pentacampians secured their tickets to Qatar without any problems, finishing 1st place in their qualifying group. In 17 matches, the team managed to get 14 victories while drawing three times.

Since qualifying for the World Cup, the Yellow and Green have played four friendlies in which they defeated South Korea 5-1, Japan 1-0, Ghana 3-0 and Tunisia 5-1. At the moment they can boast a 15-match unbeaten streak with 12 wins.

During this stretch, the Brazilians scored 40 goals. Eight of them were better by the main star of the team – Neymar.

By the way, the PSG forward has a great opportunity to break the record of his legendary compatriot – Pele – in the near future to become the best scorer in the history of the national team. For that he needs to score just three goals. Looks doable. A great motivation for Ney to show his best at this mundial.

“To dream, to aim and to put your goal as a priority is not to believe your rivals but to set yourself a goal to go after. Tomorrow it begins! Vamo que vamo!” declared no. 10.

Also, before the start of the tournament in Qatar, the Brazilian national team is recognized as the best team in the world according to the FIFA rating. The power of the Brazilians can be confirmed by the statistics: this year they won seven of eight matches with a total score of 27:3.

The last match played by the Brazilians was a friendly against Tunisia. It took place on September 27, 2022 on a neutral field in Paris, where Brazil crushed the Africans (5-1) completely dominating and controlling the game.

The Brazilian national team brought to the tournament a fascinating star lineup: Neymar, Vinicius, Antony, Gabriel Jesus, Rodrygo and Richarlison in the attack, Alisson and Ederson will vie for the place in the goal, the midfield and defense are solidly composed of players from the top European teams. Not surprisingly, experts believe the Pentacampeans are the main favorites of the tournament.

Tottenham Hotspur forward Richarlison was the best of the team in recent games. In six games (303 minutes on the pitch) he scored seven goals and gave two assists. In comparison, Neymar has 5+2 in five games.

Liverpool goalkeeper Alisson Becker is still regarded as Tite’s number one, and the 30-year-old is in line to keep his place between the sticks ahead of Manchester City’s Ederson and Palmeiras’ Weverton.

If reports are to be believed, Tite is set to deploy either a 4-1-4-1 or 4-2-3-1 formation, with center-back’s Thiago Silva and Marquinhos operating in the middle of the back four in between Juventus full-backs Danilo and Alex Sandro.

Manchester United’s Casemiro could start alongside West Ham United’s Lucas Paqueta in center-midfield, with Bruno Guimaraes, Fred, Fabinho and Everton Ribeiro all expected to begin on the substitutes’ bench.

Tottenham Hotspur’s Richarlison recovered from a calf strain before linking up with the national team, and Brazil’s No.9 could get the nod ahead of Arsenal’s Gabriel Jesus in the center-forward role.

Star man Neymar is set to dictate play in the number 10 role behind Richarlison, with Barcelona’s Raphinha and Real Madrid’s Vinicius Junior the two most likely candidates to begin on the flanks.

Marquinhos and Antony, who has a muscular injury, will not be able to play against Serbia.

The Serbian team only made their World Cup debut in 2010, and they have not reached any heights during that time. In 2010 and 2018, they were left behind in the group stage of the tournament, while they have not managed to qualify for the 2014 World Cup at all. For the last 2018 World Cup in Russia, they ended up in Group E along with Brazil , Switzerland and Costa Rica and only managed to finish in 3rd place, which didn’t allow them to make it to the playoffs of the tournament. And now after 4 years they have the same 2 opponents in the group and have all chances to get even with them.

Serbia will start the World Cup with the hope to improve the FIFA rating – the team is currently in the 25th position. The Eagles have already proved their worth in the WC quals, where the team remained undefeated. Over the eight rounds of the group stage, they have not suffered a single loss, with draws in games against Portugal (2-2) and Ireland (1-1). In all other encounters, the White Eagles won, particularly against the Portuguese (2-1).

In addition, men of Dragan Stojkovic performed well in the UEFA Nations League. After a poor start – defeat against Norway (0-1) – they smashed neighbor Slovenia (4-1), while also drawing vs Sweden (1-1) and Slovenia in the return leg (2-2). After that, the Serbs won their matches against the Swedes (4-1) and the Norwegians (2-0). In preparation for the World Cup, they played just one friendly in which they demolished Bahrain 5-1.

However, it is not only the results that are important, but also the squad which certainly has some big names. Of course, in terms of strength the team selection is inferior to Brazil, but there are enough players playing at a high level. For example: Vanja Milinkovic-Savic (FC Torino) and Sergej Milinkovic-Savic (Lazio), Juventus’ Dusan Vlahovic (player who has the highest market value above all, now valued at 80m dollars), Luka Jovic (Fiorentina), Filip Kostic (Juventus), Sasha Lukic (Torino), Nikola Milenkovic (Fiorentina) – all these names are well-known in Serie A.

Also, we should not forget the two leaders of the Serbian national team. Dušan Tadic, the Ajax forward, in his turn, scored three goals and gave 13 assists in 20 games (six in the Nations League and 14 in the Eredivisie).

The second Serbian star is another forward – Aleksandar Mitrovic, the Fulham FC symbol. He has good numbers as well, scored 15 goals in 12 games in all competitions (including the national team).

After initially exploiting a four-man defense in last week’s win against Bahrain, Dragan Stojkovic is expected to get back to a 3-def system, which could see Pavlovic join Milenkovic and Mitrovic at the back, Vanja Milinkovic-Savic will try to do his best being the last man before the net.

Zivkovic and Kostic will have their chances as wing-backs, while Lazio star Sergej Milinkovic-Savic is set to join Sevilla’s Nemanja Gudelj to crucial cement central zone.

Captain Tadic will serve as a dispatcher. Key player, who provided more assists (six) than any other player in UEFA World Cup qualifying – is expected to dictate the role of number 10 and provide support for strikers Vlahovic and Jovic.

Don`t miss out 👉: Portugal vs Ghana: Preview and Prediction

Statistical preview of the match Brazil vs Serbia:

What has been said before the match:

“We feel and believe in ourselves and everything we have done. We are in a good situation, we are all healthy, believe in us and be sure that we are ready to do our best. Extraordinary atmosphere, we are happy when we are together, we have a great mix of experienced and older players”.

“I am ready and grateful for the opportunity to be the captain of Brazil, as well as to be part of the team in these years. We have to be ready, because we know how important the first game is, it wouldn’t be good at all if it was a draw because of going to the knockout stage”he added.

“Serbia has a lot of experience, with good results, they had some injuries, we follow them, we respect them a lot, I’m sure that everyone will be ready, but we are favorites only until we enter the field. We must especially pay attention to their offensive characteristics”.

“The pressure is natural. Brazil have the biggest history in soccer and with that legacy always comes the pressure. We have some of the players that call the biggest media attention in the world so we take it naturally, it’s our dream of winning a World Cup. Pressure is inevitable.”

Answering a question about World Cup 2018, he said:

“In Russia we only had two years to fix the team and I came to the rescue. Now it is different because I had the opportunity to build the team the way I wanted. That’s why my feeling today is completely different than four years ago. I’m not that nervous because all the necessary work has been done.”

“We are afraid of nobody in the world, not even Brazil. We don’t need to be afraid. Brazil is a great team. For me it’s a golden generation at the moment and we expect of course a difficult game but we must focus on our football and try to be good opponents”.

“Mitrovic has been working with the team in the past four or five days and the good news is that he feels no pain in the area where he had the injury”.

Don`t miss out 👉: Cristiano Ronaldo washes his hands and leaves the Red Devils’ сamp while owners put the club up for sale

The Serbian team appears to be an impressively mentally strong team, boasting some interesting, high-quality players: Aleksandar Mitrovic (the fifth goalscorer in the EPL), his namesakes Vlahovic and Tadic, and the Milinkovic-Savic brothers. Still, Brazil has considerably more classy footballers. It is not for nothing that FIFA put them at the top of their team rankings.

The Pentacampeons play very potentially, scoring an average of 3.37 goals per 90 minutes. In addition, they have a great example from their neighbor Argentina that stresses that no one should be underestimated. We expect the favorites to come out on top and put severe pressure on the underdogs from the opening minutes. The caliber of players from some of the best clubs in the world will be instrumental to the Yellow Blues’ performance, their ability provides a great opportunity to shake things up. Yet you can be sure that the characterful Balkans are going into the match with a true warship affirmation, which suggests that the fight is gonna be fierce and hard.

We say: Brazil to win and both teams to score – Yes.