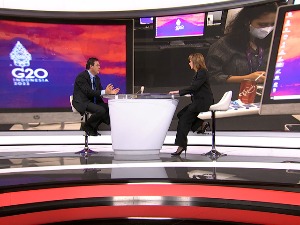 It is held in Bali The G20 summit of the world’s most industrially developed countrieswhich account for 80 percent of economic production and represent two thirds of the world’s population.

Instead of the Summit’s official priorities: health, sustainable energy and digital transformation, in the foreground are fears about the faltering global economy, geopolitical tensions over the war in Ukraine and growing tensions between China and the West.

Professor Dejan Erić explains to RTS that the war in Ukraine forced the Bali Summit to discuss security and conflict containment, in addition to issues of digitization, recovery after the coronavirus, and the green economy.

Speaking of the meeting of US President Joseph Biden with Chinese President Xi JinpingErić believes that the meeting left a big mark, and that attentive analysts even recorded how long their handshake lasted.

“I think dialogue is always good, when there are big differences between two sides. Dialogue helps you understand the other side. A lot of issues were raised, some of which are political. Certain issues were not at all pleasant for either side, like the Taiwan issue,” says Eric.

“China will come out of the war as a profiteer”

Russian-Chinese trade, according to Chinese customs data, jumped by a third in the first nine months of this year and is approaching an all-time high of $154 billion. At the same time, according to certain information, the number of car dealerships selling vehicles from China increased from 300 to 936 in several Russian cities.

Erić says that these data are correct, and that they do not surprise him, because “economies often function according to the principle of merged courts”.

“Economic history teaches us that in a war you have winners and losers both on the battlefield and in the economic sense. Without any doubt, China will emerge from this war conflict as someone who profits,” says Erić.

He adds that the data for the automotive industry is “fascinating”, recalling that the first Chinese car was made 20 years ago. “In 20 years, the automobile industry in China has experienced a great expansion. Now a large market has opened up, where they have no competition,” says Erić.

Why the extension of the grain agreement is important

One of the questions is whether Russia will agree to extend the agreement on the export of Ukrainian grains, reached with the mediation of the UN and Turkey, which should be renewed on November 19.

Erić emphasizes the importance of that issue, stating that, if Russia agrees to extend the agreement, an enormous increase in the price of food at the world level will not be expected.

The National Bank of Serbia, following the moves of the FED and the ECB, increased the reference interest rate, the eighth time since April. Dnevnik’s guest explains that the measure to increase interest rates was forced, due to the great inflationary pressures the world is facing.

“Inflation is only a symptom of the disorder that exists. As long as the causes are not removed, inflation will not subside either. What is happening in our country is a consequence of what is happening in general economic relations,” says Erić.

When will the price drop?

The Bureau of Statistics announced yesterday that the prices of personal consumption products and services in October compared to September increased by 1.9 percent on average, but compared to the same month of the previous year, they increased by 15 percent.

Erić points out that the increase in the price of energy, transport, and raw materials spilled over to consumers.

“As the world economy recovers and as inflationary pressures decrease in developed countries, the pressure will decrease here as well. In addition to real factors, you also have a group of monetary factors, which were connected to the fight against covid, where there is a lot printed money. Now the bill is coming for that too,” Professor Dejan Erić concludes.