Canines detect a covid an infection in a second 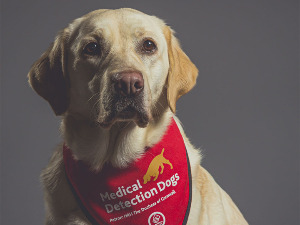 It turns out that people who are infected with coronavirus have a specific smell that well-trained dogs can detect with very high precision, it is known that people have about five million receptors in the nose, and dogs up to 300 million.

Dr. Clara Guest has always been fascinated by dogs and their relationship with humans. After completing her studies in psychology, she worked on training dogs that were helpers for deaf people, where she met a woman who claimed that her Dalmatian had discovered that she had malignant melanoma.

In 2002, Gest teamed up with orthopedist John Church to investigate whether it was possible to train dogs to distinguish the urine of healthy people from those with bladder cancer. A study whose results were published in the British Medical Journal showed that they can.

The dog unit for medical diagnostics was established in 2008. This charity trains dogs who can detect changes in people with type one diabetes and other disorders that occur just before the condition worsens, and thus warn in time that medical treatment is necessary.

The organization also researches the ability of dogs to detect cancer and other diseases, including Parkinson’s disease. When the coronavirus pandemic started, they were nearing the end of a study they conducted in collaboration with the London School of Hygiene and Tropical Medicine, which showed that dogs can detect malaria.

The results of the just-published study show that dogs detect kovid 19 on clothing worn by infected people with an accuracy of 94.3 percent, as opposed to rapid antigen tests that have 58 to 77 percent accuracy and compared to the p-si-ar test that has 97.2 percent.

However, dogs beat p-si-ar speed tests because they make a diagnosis in less than a second. “This also applies to asymptomatic cases, as well as to people who are mildly infected,” said Professor James Logan of the London School of Hygiene and Tropical Medicine, who was one of the leaders in this study.

The golden retriever Tala was the most accurate and in 94.5 percent of cases she managed to detect a covid infection.

Birds, such as spaniels, retrievers and labradors, are especially good breeds of dogs for detecting coronavirus. “These are dogs that absolutely love to sniff and explore,” claims Gestova. “They are also very tame and love working with people in public places.”

It takes eight to 10 weeks to train a dog to detect kovida 19. In this study, dogs were trained to sniff out T-shirts, socks and masks donated to them by the National Health Service, some of which had a positive test for kovid.

Dogs will not be able to replace p-si-ar tests, but they could be of great use at airports where they could inspect arriving passengers much faster and determine when to undergo a psi-si test or quarantine while waiting for results. , which would significantly reduce the need to provide quarantine accommodation and the cost of PR testing.

The biggest challenge is training because it requires time and clothes worn by infected and uninfected people. A study is underway to identify odor molecules that dogs are able to smell, which would enable the production of “pseudo odors” that would be used in the training of a large number of dogs.

Given that similar projects performed in many countries, including Finland, France and Lebanon, it seems that it is not impossible for dogs to be permanent “employees” at airports in the future.