Christmas liturgy within the Church of St. Sava, the 7,000-piece garlic clove is damaged at 11 a.m. 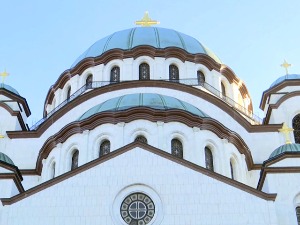 The faithful arrive at the Church of St. Sava and light candles, where from 9:00 a.m. Bishop Stefan will serve the Christmas liturgy with the concelebration of Belgrade priests.

After the liturgy, the traditional breaking of garlic was organized in front of the Temple around 11 a.m. after a two-year break due to the pandemic.

The garlic, as announced, will have more than 7,000 parts, and 33 gold ducats will be hidden inside.

It weighs more than 250 kilograms, with a diameter of four meters. The dough has been kneaded since last night at 6 p.m. by seven masters of the AS Braća Stanković bakery.

Packages will be distributed to the little ones in front of the Temple.

The Christmas liturgy and breaking of the garlic was preceded by the midnight liturgy served by the Serbian patriarch Porfirije, as well as the lighting of the Christmas tree in front of the Temple, which was attended by a large number of believers.

Such an atmosphere was also present in temples and churches across the country, where worshipers gathered around a burning fire that symbolizes purification and community, prosperity and health.

Healing the planet from the coronavirus last year was one of the central messages of the Serbian patriarch’s Christmas message, while this year’s letter primarily devoted to prayer for peace and freedom of the Serbian people in the area of ​​Kosovo and Metohija.

In the letter, the patriarch also prays for the return of peace to the areas affected by the war between the Russians and the Ukrainians, so that everyone can escape and return to their homes, and the cities can be rebuilt.