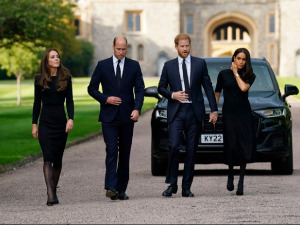 The citizens who were gathered around Windsor, as the princes accompanied by their wives left the castle, first observed a minute’s silence in respect to the deceased queen, and then greeted them with applause. It is the first time that both couples have been seen in public together since the anniversary Commonwealth Day on March 9, 2020.

A spokesman for Prince William said he had invited his brother, the Duke of Sussex and his wife, the Duchess of Sussex, to join him and the Princess of Wales to view the messages and flowers left outside Windsor Castle.

The Prince and Princess of Wales and the Duke and Duchess of Sussex left Windsor Castle after a 40-minute tour and chat with the crowd in the same vehicle.

“My grandmother used to say that sadness is the price we pay for love.” All the sadness we will feel in the coming weeks will be a testament to the love we felt for our extraordinary queen. I will honor her memory by supporting my father, the King, in every way I can,” said Crown Prince William.

Has Harry been forgiven

Some media reported that Meghan did not accompany Harry to Balmoral Castle when he went to say goodbye to his grandmother, allegedly at the express request of his father. the newly proclaimed king Charles the Third.

On the other hand, many believe that in his first address to the nation after the death of his mother, the king extended a hand of reconciliation to Prince Harry and Meghan.

“I also want to express my love for Harry and Meghan who have continued to build their lives abroad,” Charles said after passing on his title of Prince of Wales to William, in what many interpreted as an attempt to reconcile with his wayward son.

In an interview with Oprah Winfrey in March 2021, Prince Harry revealed that at one point his father did not want to answer his calls.